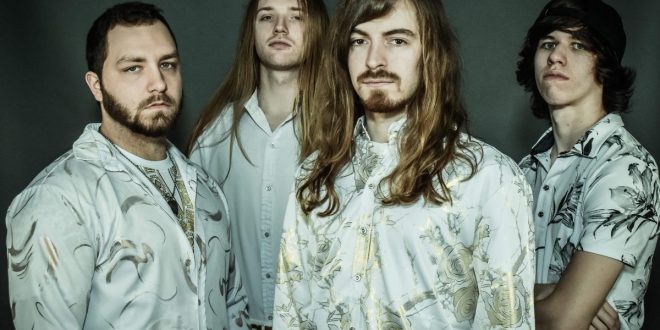 For Worcester, Massachusetts hard rock band Young Other, the decision to write and release an acoustic version of their single ‘Between The Few’, was a happy accident. “Throughout the course of being on the road throughout 2019, we found ourselves in Fort Wayne, Indiana at the Sweetwater Headquarters a day before our show in Muncie,” they explain, “Brandon and Devin found themselves in the acoustic play room tossing ideas back and forth on a somewhat swing/classical acoustic idea for Between The Few and presented it to both Adam and Dale. We felt it sat with us as we were approaching the new 20’s decade, one hundred years after the roaring 20’s.”

The single is the title track off of Young Other’s debut EP. Since it’s release, it has racked up over 25k plays on Spotify and over 5k views on YouTube. The band began 2019 with sold out shows alongside Saving Abel and Tantric. This set the pace as Young Other began to travel throughout the Northeast and Mid-Atlantic regions of the United States making their debut appearance in NY, IN, PA, NC, WV, while sharing the stage with bands such as Puddle of Mudd, Mushroomhead, and Blacktop Mojo.

The band used their time during quarantine to work on a video for ‘Between The Few (Acoustic)’, saying “Over the past year, things have become darker not only in the world, but within our personal lives as well. There have been challenges we’ve faced, trials we’ve endured, and tears that have been shed. We wanted to highlight this in our video with the image of the bird that once found its way out of the dark, had fallen and lost everything while being withheld in its cage. Our attire featured much less gold, which resembles the flame within us, and the core of our appearance being dressed in black.”

With the arrival of a new decade, Young Other has been at work redefining their sets for a more theatrical and engaging live experience, writing and recording new music, and gearing towards an explosive re-entry to the road in 2021. “After nearly six months since our previous release, we have been hard at work creating and defining what lies next for us on this journey. With recently signing under the management of MVK Music Group, and being added to Wavelink Agency’s Touring Roster, our hearts are set on the passion that burns inside us to grow our family, and to form a community that shines a light on each other during the moments of darkness. As the darkness may have settled over us at the end of this chapter, we too shall soon be, Reignited.”

‘Between The Few (Acoustic)’ is now streaming on all major platforms.