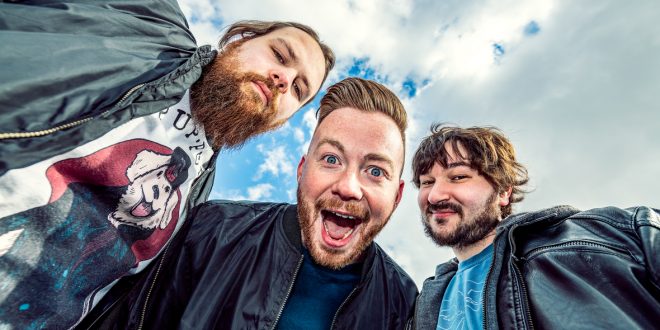 NY metalcore trio A Greater Danger has shared a music video for their latest single “Sycophants” featuring guest vocalist Jay Jimenez from The Fallen Prodigy. The video captures a “fun” side of the band, showing fans that while they often write serious music, they try to have a good time and not take life too seriously.

“The video pulls influence from A Day To Remember’s ‘I’m made of wax larry, what are you made of?’ video,” says vocalist Chad Douglas. “Everyone involved in the production of the video signed the basketball we used and we intend to hold a giveaway/raffle for it.“

The basketball that Douglas is referencing is used in a sloppy, but hilarious one-on-one game between he and Jimenenz, with the rest of the band literally being cheerleaders.

“Sycophants” contains some serious crowd-moving breakdowns, touched up with dueling melodic hooks. The song is about the difficulties of chasing what you’re passionate about and the people you’ll meet along the way. It also serves as a callout to those who will attempt to take advantage of opportunity only to use and abuse their position.

A Greater Danger formed in 2016 with the release of their EP Past Is Prologue, which helped establish AGD’s presence in the local community. After realizing the potential AGD could offer the community, they broke out onto the music scene in 2018 and have gone on to open for acts such as Crown the Empire, We Came As Romans and Hands Like Houses, to deliver a message of unity and self-expression to as many people as they can reach. The Syracuse, NY rock quartet — Chad Douglas [Vocals], Fred Turner [Guitar, Vocals], and Keenan Reynolds [Bassist] have been making their mark in their region with ambitions to carry upward and onward.

Listen to the single “Sycophants” now on Spotify.