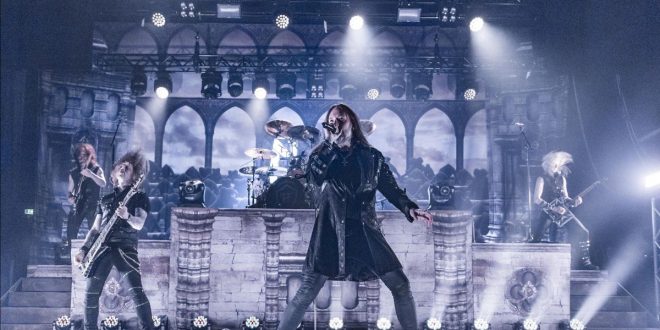 Since the 1990s, Sweden’s Hammerfall has cemented a reputation for its masterful, anthemic songcraft, a standard that is matched (and at the same time, wholly complemented) by their magnificent large-scale concerts in subsequent decades. Starting in 2019, the Gothenburg metal quintet embarked on a lengthy tour in support of their latest full-length album, Dominion. However, the United States leg of the tour would be abruptly cut short in the wake of Covid-19, prompting a worldwide uncertainty that persists to this day.

Fortunately, to keep fans in high spirits, the band will release Live! Against the World on October 23rd. The album is a live recording of their February 15th performance, capturing one of the last shows the band would play prior to the pandemic. To gain a better perspective of how the band is feeling currently, I caught up with Hammerfall bassist Fredrik Larsson, who was open to discussing the new album, his thoughts on the pandemic, his presence in the band since joining in 1996, as well as how the band stays positive during these times.

How’s everything with the band these days?

The band is alright. It is what it is, with this Covid shit, you know? I actually haven’t seen three of the members since March, when we ended the European tour, but I’ve been able to speak with them on the phone.

Yeah, it has very much affected us. We haven’t been able to see each other like we used to, and we honestly haven’t done anything as a band or rehearsed together since then. But at the same time, with technology, there’s so much you can do as far as sending each other files and song ideas. You can still do a lot from a distance, but I prefer being in the same room and playing together; that’s how I’d do it.

When it comes to the new album that you’ll have out later this month, what is it about this particular show that resonates with you the most?

First of all, I just want to say that we’ve been very lucky to have done the European part of the tour before Covid happened. The show was planned for a very long time. It was a big, big production with a camera crew, stage sets, pyro, and everything, so it was a big thing for us. We wanted to present Hammerfall to the rest of the world, and this is very much a reflection of how we sound today. In my opinion, Hammerfall has never sounded this good before, and we’ve never written a bigger production either, so it was very special for us.

So, it’s all about reaching an international audience, and making sure your presentation is as accessible as possible.

Yeah! You want to present the band in a way you can stand by. It’s a good experience if you haven’t seen Hammerfall before, but if you have seen us, this is really good! There’s a great diversity in the setlist, and we picked at least one song from each album – even some songs that we’ve either never or rarely played live before. I think it has something for everyone.

That’s really cool! In general, what do you miss about playing live?

Ahh, I miss everything (laughs)! I was so looking forward to the whole summer festival this year, and as we speak, we would have been in the middle of a US tour. I love playing in the US, but these days, it’s been really strange. I’d get texts from Joacim [Cans] saying, “Today, we would have played Atlanta,” or Philadelphia, or wherever. It’s sad, but at the same time, there’s nothing we can really do about it. Hopefully we’ll be able to get back to the US tour cycle later on.

This show also marks 20 years since the release of the album Renegade. Can you tell me a bit about your early days in the band?

I joined the band in ’96, and was on the first record, Glory to the Brave, in ’97, but then I dropped off, and actually went away for ten years. I came back in 2007, so I didn’t experience the big take-off for Hammerfall other than from the sidelines, of course. I can’t say much about that period, but I know that when I returned to the band, it felt pretty much the same as it did when I left. It felt great to be back and from there, we just continued. Like I mentioned before, we’ve never sounded better.

From the time you were out of the band, did you stay in touch with the guys over the years?

Yeah, I mean, we’re all from the same city, so we’d always tend to bump into each other in all the bars and other rock venues, of course (laughs). We also have a lot of mutual friends as well, so I was able to stay in contact with each of the band members – especially Oscar [Dunjak]. I’ve known him for a very long time, and we’d played in another band [Ceremonial Oath] before this. We’ve always had a good relationship from the start.

Going back a bit further, when you were growing up, which bands shaped your sound as a musician?

Well, the very first vinyl I ever bought was Restless and Wild by Accept, and the first big concert I went to was also Accept. They made a big impact on my musicianship, and what I liked musically. I also listened to a lot of 80s metal like Iron Maiden, and thrash like Anthrax, Metallica, and Slayer – all those classic bands. Later on, I started listening to a lot of death metal in the early 90s. It’s a lot of different bands that shaped me.

It’s a diverse influence spectrum, for sure. Do those bands still inspire you even now?

Yeah! I’ve listened back to those records, and I’m still amazed at how good they sound, whether they’re by Accept, or someone like Dio, they still sound amazing when you put them on. I’m not sure if I play very much like the bands I listen to; I don’t play like Steve Harris from Iron Maiden, or Peter Baltes from Accept. But they make me play my way, at least (laughs). So, I’m inspired, not necessarily by how they play, but what they do.

Your most recent single from the album is “Keep the Flame Burning.” What does that mean to you, based on your experiences, and especially during these difficult times?

To keep the flame burning is something, especially when you’re out on the road. You have to do it for the right reasons – you have to have fun on stage, and have fun with your band. Otherwise, if you’re not, it’s going to show in your performance. People will notice, and if you don’t think it’s fun anymore, then you should probably do something else. In these dark times of Covid, it’s honestly hard to keep that flame burning, but we know what’s waiting around the corner. We know that there will be live music again, and we will do more shows and release more records. That’s what gets us going.

Considering all you’ve been through with the band, what have you learned about yourself, both as a musician, and as a person?

I’ve learned a lot of things. I mean, we’ve been together for so long, and there have been ups and downs for sure. You have to respect each other, and realize that there are times where you need to give the other members some space. You shouldn’t always feel like you have to tell them everything, and you should respect their privacy if they need time off. But also know that if you need someone, they’re here to listen. That’s a kind of security within the band that’s nice to have. We are really close friends, all of us, especially since we’ve lived together for so long.

Keep the flame burning, and have faith. We hope to see you all very soon again. It’s going to take some time, but please be patient, and we’ll be there.

I come from a family who is passionate about all things music. I learned to sing at an early age, and by 13, had my very own Fender Strat guitar. I tried my hardest at learning all that I could. Because I was born with cerebral palsy, I had to teach myself an adaptive playing style. I learned to write and record my own music, despite these difficulties. In college, I started making great use of my writing abilities by reviewing music, as well as copy editing. I guess it's best to stick with what you know, while welcoming a fair challenge at the same time.
Previous A Greater Danger Start a Metalcore Basketball League in New Music Video
Next SHARONE Releases Official Music Video for “Can We Pretend”