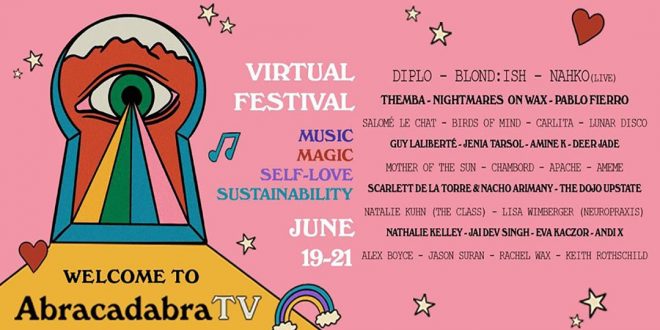 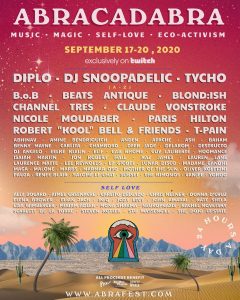 Abracadabra Festival, the new 4-day livestream music festival and environmental fundraiser presented by ABRACADABRA and Twitch, has announced its full lineup. For 24 hours each day, the festival will teleport viewers around the globe to experience live virtual performances from over 75 artists & guests including DJ Snoopadelic (Snoop Dogg), Tycho, Diplo, Chanel Tres,and Kool & The Gang, discussions and workshops with environmental thought-leaders, wellness activities including live palm reading by T-Pain, interactive magic shows, and more. The festival is free to attend and 100% of the proceeds from voluntary viewer donations will benefit environmental organizations including Lonely Whale, Parley for the Oceans, and Abracadabra co-founder BLOND:ISH’s non-profit, Bye Bye Plastic, which is dedicated to eliminating single use plastics from the music industry by 2025. While wildfires are blazing and record-breaking heat is becoming the annual norm, this fundraiser event will be hosted live from the historic Los Angeles Theatre, drawing awareness around global warming from one of the states hit hardest in recent years.

ABRACADABRA, female-founded and led by international touring artist & DJ, Vivie-Ann Bakos aka BLOND:ISH and Liana Hillison, has been producing unique single-use plastic free events in Tulum, Mykonos, and at Tomorrowland since 2017. This past March, as music venues and festivals shut down due to Covid-19, BLOND:ISH and her team quickly adapted by launching AbracadabraTV on Twitch, the world’s largest live-streaming service. Twitch quickly took notice and has officially partnered with AbracadabraTV, which now live streams multiple weekly shows featuring music, magic, wellness, and social impact programming for a rapidly growing community of creators and fans looking for new ways to connect during this new era of social distancing. “As an international touring artist affected by Covid-19, it feels like we’re cracking the code in terms of continuing to build a connection with our community and bring them new transformative experiences from afar. Virtual events have greater reach and even more merit than physical ones in some ways, and will give an edge to the human connection we feel when physical events eventually return.” says BLOND:ISH.

While ABRACADABRA plans to resume hosting physical events in 2021, it will continue adapting and innovating in the virtual event space for the good of its community and the environment.

About ABRACADABRA
Created by BLOND:ISH and Liana Hillison, Abracadabra is a community of passionate dreamers, relentless in our pursuit to make a positive impact and drive change from the inside out. Abracadabra has produced annual gatherings in Tulum, Ibiza and Mykonos since 2017 and now presents weekly live streamed shows and festivals on Twitch.

About The Charities
An ode to the power of threes: Fundraising for Planet A during the Abracadabra Virtual Festival is happening thanks to a trifecta of NGOs who have come together as the green-spirited divine trinity of dance music in a bid to impulse impact money into Mother Earth. You might already be familiar with the Bye Bye Plastic Foundation, an initiative founded by Blond:ish that aims to free the music industry of single-use plastic by 2025. Team BBP will once again helm the sustainability sector of the event, but they’re not doing it alone. This year they will be joined by Parley for the Oceans and Lonely Whale. Parley is a well-respected space where creators, thinkers and leaders come together to raise awareness for the beauty and fragility of our oceans and collaborate on projects that can end its destruction, like their union with Adidas on a pair of trainers made from ocean plastic which saw sustainability take center stage amid the mainstream. The lovely team at Lonely Whale also focuses on the ocean, acting as an incubator for courageous ideas that drive impactful market-based change on behalf of the sea. Much like Bye Bye Plastic, they are inspired by the power of community to create change that positively impacts the health of our oceans and embraces the new era of radical collaboration. What will happen during this three-way clash of green forces? Green magic, obviously. Wait for it….

Caitlin Dunn is a Massachusetts based photographer who loves photographing concerts as well as events and lots of other things!
@@caitlindphoto
Previous 35 Million Streaming Rock Band Releases New Music Video “Bleed Over Me”
Next Single Review: Phillip Gilchrist – “Song on the Radio” 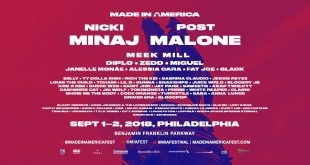 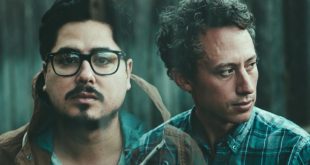 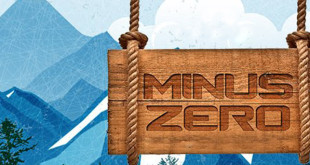