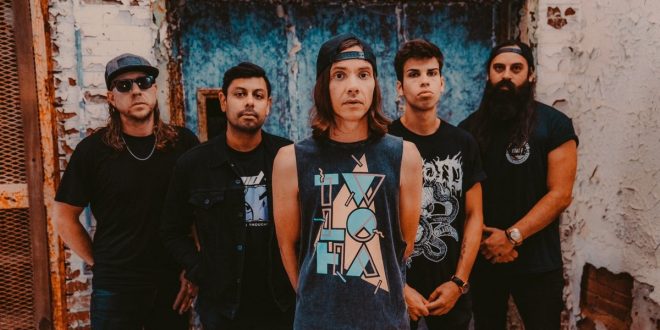 Lumbering guitars, powerhouse lead vocals and a lyrical center that alludes to everything from pandemics to police brutality, there’s no question as to whether or not The Red Jumpsuit Apparatus are bringing their A-game to the studio in their new single “Brace Yourself” and its colorful music video – in my view, they’re sounding as fresh as ever here.

MORE ON THE JUMPSUIT APPARATUS: https://www.theredjumpsuitapparatus.com/

Almost two decades into their career, RJSA are arguably delivering some of their tightest content yet in this first glimpse of the new extended play The Emergency EP, and with over 1.3 billion streams to their credit, it’s obvious that their dedicated fan base hasn’t started to erode by any means. “Brace Yourself” is a brutishly physical number that borrows as much from a mainstream metal framework as it does certain cues from the pop-punk of yore, and despite its being one of the few rock songs out this summer that doesn’t sport an overtly surreal influence, it’s undisputedly on-point with what I’d expect from this band these days. The Red Jumpsuit Apparatus have never been known for following the rules, and this latest studio cut presents them as the same rebellious crew that won many of our hearts years ago.

That said, there’s definitely more of a virtuosic bend to the fretwork in “Brace Yourself” than I was initially anticipating I’d hear, but it’s a welcome addition to this track just the same. In an age when guitar worship has transformed into something wholly synthetic and anti-blue collar in nature, you can tell that The Red Jumpsuit Apparatus are still putting a lot of stock in recording with organic components whilst steering clear of lackluster ‘retro’ aesthetics in their songwriting. I really like the seamlessness to the master mix here; it both adds to the harmony and reinforces the unassuming emotionality in the lyrics, particularly as they’re presented to us in the video for “Brace Yourself.” The lead vocal holds everything together brilliantly but never sounds overbearing on the instrumental end of the track, and considering the multilayered style of producing that was employed for this piece, the general sense of refinement in the quality of the music is definitely something worth writing home about.

If this is just a sample of what the rest of The Emergency EP is going to sound and feel like, I think we can rest assured that it’s going to be one of the sweeter rock releases to hit record store shelves this coming August. 2020 has been one heck of a strange year no matter how you look at it, and although mainstream pop and rock output has been just as unpredictable as anything else has in recent times, this is one band that can be relied on for some decent riffing and solid lyrical commentary when we need it more than ever.

The Red Jumpsuit Apparatus have aged far better than most of the emo and post-hardcore bands that made waves in the early to mid-2000’s have, and personally I find their continued success at home and abroad to be ample proof of their eminence.

Vocal harmonies born of the dirt from which the stories they convey were first sourced. …