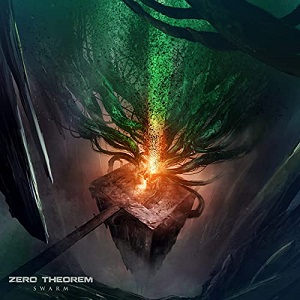 It’s a freeing feeling to be your own boss. Your own thinker, doer and captain. Imagine being stuck in such a rut that you gave up raising your hand when you saw something you didn’t like? Or didn’t stop to think something seemed out of sorts and just walked on by? Playing off the idea that you were completely superficial and pretended to care, well that’s the stuff rock stars can and should be writing about. “Swarm” the new stunner from Zero Theorem transcends logic and rises to the occasion.

The song starts out with a swarm of bees, collecting together, then opening into a solid rock wall. Over a backdrop of disheveled guitars, a boasting bass guitar and a cacophony of percussion, lead singer Caesar makes his presence known on the soap box in the same fashion a Broadway singer would: bold. Caesar adds Teflon Grip-level vocals (much like Bruce Dickinson from Iron Maiden and Sully Erna of Godsmack). He’s melodic undertows gather yet another emotional connection to the listener. Let me go, he bursts, before stating the struggles and imaginative ways society has lost its way. Take a picture now, keep the gift you have, he sings with fierce pleading. Unfortunately, my many years of concert going ears are failing me and I couldn’t quite hear what Caesar is singing in most parts of the song –fused with the heavy guitar riffs, he enunciation didn’t come through clear. You’ll have to listen to discover if you have the same problem, or maybe you have the same affliction I have. I should have worn those ear protectors all those years. But, like this song claims to be – I didn’t want to look different. I’m such a schmuck. These guys are singing about dummies like me.

Zero Theorem, a five-piece based in Los Angeles, backs up Caesar in the up roaring chorus – swarm, swarm! The propelled drums act as if they are lit, with the fire rushing out of the room as if gasoline had been thrown throughout. The rush and the adrenaline in “Swarm” is a high octane experience. If my ear drums weren’t already bruised by the asshat on the motorcycle (in addition to not wearing earing protection at many, many concerts), I would definitely get a contusion that I would proudly proclaim to all my friends. Courtesy of these fearless rockers Zero Theorem I would rage! “Swarm” doesn’t let you go and it won’t break away from your path, you better get out of the way, or expect to be swallowed hole.

Zero Theorem is lead singer Caesar, guitarist Roy Lev-Ari, guitarist Max Georgiev, bassist Eloy Palacious and drummer Jake Hayden. “Swarm” is from the forthcoming EP, Killing II, expected later this year. Zero Theorem’s debut EP ATRAXIS flexed the two hits “Area” and “Becoming”. In 2019 they released “You” from the EP, The Killing I. If history is on their side, and I do think it is, they will keep piling up the songs and growing their fanbase.