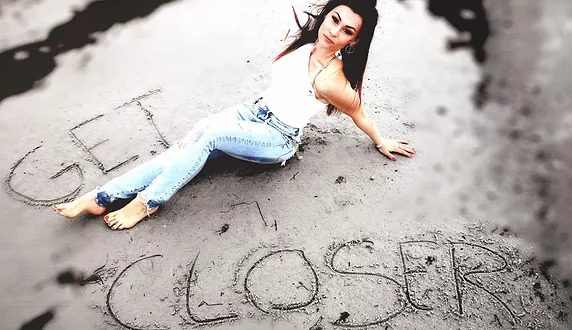 Although obviously composed as a tight piano ballad on paper, there’s nothing black and white – nor particularly conventional – about the melodies that are unleashed when Arina Mai starts to play “Get Closer,” her new single currently out everywhere quality independent pop music is sold and streamed this summer. Blending contemporary alternative aesthetics with a dreamlike, atmospheric post-pop that is perhaps even more spellbinding than any lyric could ever be, Mai dives into a very surreal territory in this track, letting her velvety voice do most of the heavy lifting in terms of defining the song’s core narrative.

There’s no hesitation in her delivery, nor is there ever a moment in which she sounds caught off guard by how big a hook she’s attempting to make her own. Instead, Mai sounds completely in her element and at home with her studio surroundings, loosely alluding to her many years spent developing her skills with every careful beat she follows. This is a big moment for her career, and once you’ve heard “Get Closer” for yourself, I think you’ll understand why I would even go as far as to call it a cornerstone of what could become a mighty success story.

Mai’s voice is always the most potent element in this mix, but the overall structure of the song is essentially minimalistic in spirit and design. As I mentioned at the start of this review, there’s nothing straightforward about the way she marries the melodic fabric with her own vocal harmonies; in fact, she seems to go out of her way to make them the primary catalyst for emotion in this track well before the lyrics. This isn’t to say that the lyrical content in “Get Closer” somehow feels lacking beside the instrumental prowess in the background – far from it – but merely to acknowledge that Arina Mai is being as much a concert pianist in this single as she is a dedicated pop singer/songwriter. There are no frills in the instrumentation, and that simplicity actually helps to reflect the depth of the passion we can find in every verse here. It will definitely be interesting to hear how this ends up being performed in a live setting, primarily because its flexible construction leave Mai with dozens of arrangement possibilities. This could be a straight-vocal piece as easily as it could be a rock power ballad, which is essentially what sets apart the iconic compositions from the standard FM fodder you’ll find on your radio dial no matter the time of day.

A versatile pop song that hints at experimental tendencies I cannot wait to hear more of, “Get Closer” is a great track from Arina Mai that music aficionados everywhere should make a point of listening to before the summer is over. She’s still growing into her sound and finding her place in the greater international hierarchy, but by my estimation, it’s hard to picture Mai remaining an underground sensation for long – she’s destined for the big stage, and that much is more than obvious even in the most cursory examinations of “Get Closer.”