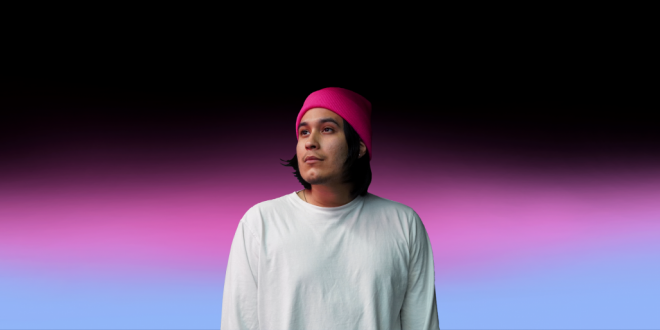 Dirty White Shoes is a Portland, Oregon-based project led by Angel Ascencio. Debuting with the singles “Hollywood Looks Good on You” and “Midnight Kind of Love” in 2019, and following up with this year’s “For the Last Time,” the band incorporates a distinctly dreamy indie pop blend that channels such acts as LANY and The 1975.

Yesterday, the band dropped their latest single, “Pretty Face and Tattoos,” and today marks the premiere of its accompanying music video. Ascencio reached out to me to discuss his formative years leading up to the band, as well as the poignant thematic angle of the new single – a personal account of the tension, uncertainty, and ultimately, moving forward, from his two-year relationship.

Prior to starting Dirty White Shoes, what memories do you have of your musical environment when you were younger?

When I was 14 years old, my family introduced me to church. From there, my pastor one day needed a drummer for our youth service on a Wednesday. He asked if I played any instruments, and I said, “No, I know nothing!” Then, he showed me a beat and wanted to know if I could play it for that night’s service, and I said “Absolutely!” I mean, what teenager doesn’t want that kind of attention? So, I took on the challenge. Let me tell you, though, the experience was horrible (laughs)!

Yeah, but in a way, that actually kind of sparked my desire to play in front of people. It just felt like a genuine calling, and something I could see myself doing in the future. I began teaching myself, and from there, I learned other instruments like guitar and piano, and also taught myself how to sing. All of that was pretty much self-taught.

Which artists really influenced your musicianship?

Early on, it was the drummer Aaron Gilespie from Underoath. I really loved his passion when it came to playing shows, I loved his art, and how he really gave it his all when playing drums. I just thought that was so cool, and he changed my whole outlook on music at a young age.

He was the catalyst in a lot of ways.

Yeah, he definitely was.

You’d also been involved in youth group at church. What do you take away from that experience in relation to what you do now?

I think at that time, I was a different person. I was more focused on the church side of things than the music. It didn’t necessarily hold me back, but it taught me about who I am deep down – not to be a specific person, but to be someone that I was pretty much created to be.

For well over a decade now, you’ve been playing music, and another musician you look up to is your bandmate, Danny Nava. Could you tell me about how that friendship began?

I love that question! So, when Danny and I met at age 14-15, we actually weren’t the best of friends. We seemed alike in a lot of ways, but at the time, we looked at each other more as competition – you know, just a bunch of teenage boys. Then, there was a day when he and I were the only freshmen in our youth group, and once we shared that desire to play music with one another, we both found that middle ground and sparked a friendship. From there, we became the best of friends through the power of music. In high school, that’s what it was all about – just he and I, day and night, playing and writing, and we would also start little bands together. It’s funny you mention him, but yeah, he’s always had a real impact on my life when it came to pursuing music.

Last year, you debuted with the single “Hollywood Looks Good on You.” What inspired that song?

I’ve always had this dream of being in Los Angeles, surrounded by creative people with the same drive and desires as I have. When that song came to life, it was more about how Hollywood or LA doesn’t have to be a specific place; anywhere we go, we can make our Hollywood. If I can’t be there, then I’m going to write about it like I’m there. It’s about noticing moments and things in life that we put in a Hollywood setting.

Exactly, that’s a good way of putting it!

You have your new single out, “Pretty Face and Tattoos,” which is another reason for our talking now, given the substance of its theme. How did that song come about, and how did you feel while writing it?

I don’t want to sound basic, but it really came from the heart (laughs). I was in a dark place in my life where I essentially gave up two years. I gave up two years of music, and two years of happiness, for someone who I thought I loved. After I realized that I wasn’t myself, and was investing all this time just on one person, I became really depressed. For another year, I was in a state where I didn’t touch any instruments – didn’t play or sing. When I wrote the song, I was really angry and upset, but once I finished it, it was like reaching a sense of peace and closure. What was on my mind and in my heart, I was able to put down on paper and play on the piano. It was like, that’s it – like putting a note in a bottle and sending it on its way. If anything, it motivated me to make up for the time that I lost and try to get it back.

From what I gather, the tones of the song and the lyrics are like a constant pattern of bliss and strain, until you say to yourself, “I’m strong, and I will get through this.”

Yeah, absolutely, and you’re right on. It’s that sense of whatever happened has happened, and though I couldn’t change that, I can change my future.

At a point in the relationship where you’d gained a better understanding of what you were going through, was there a lot of outright tension, or did it feel more indifferent and uncertain?

I’d say it was a combination of anger and uncertainty. We could never see eye to eye, you know? I felt like I was a project – like I had turned myself into something she wanted me to be.

In your experience, how did you ultimately ease that pain?

It was toward the end of our relationship. I was actually with my girlfriend at the time, and one of my close friends, and we were driving at night on the freeway, going to downtown Portland. I was in the back seat, and the band LANY was playing on a Spotify playlist; it was a really old song, “Made in Hollywood.” Once I focused on the instrumentation and the frontman’s voice, I just fell in love with the sound, and I felt like I needed that in my life. I started asking myself, “Who are these guys?” “What are they all about?” Then I got all their music and just became obsessed with the band. It was also when they were on the verge of becoming big. But yeah, that moment in the car ride, listening to that song, really changed my life.

It seems like, regardless of how long it’s been, you still recognize your potential, and ultimately, your goal, to keep going no matter what.

Exactly. Whether I succeed or fail, I’ll always know that I’m doing what I can, and that I’m content.

Do you see the nuances of these themes being expanded into an album eventually?

I actually have a list of songs that I’ve considered for an EP. If it were an album, I have an idea of what it would be like. It would probably start out with remembering the days when we were young, growing up with our friends. Then, it would transition into falling in love and heartbreak, and how, as we get older, we begin to love ourselves more. The album would end on a positive note, saying “I found who I was,” with the adventures that I’ve been on pretty much defining the concept of Dirty White Shoes. Those shoes aren’t meant to stay clean because they carry us through trial and error every single day. It’s the walk of life, basically.

In general, when it comes to fleshing this music out, do you produce it yourself, or do you collaborate with others?

With this particular song, I produced it myself, and this quarantine has been useful in allowing me to really sit down and work. For songwriting, I collaborated with another artist with part of the lyrics, and what to say at certain parts, but for the other songs, I’d worked with a couple of other producers. For “Hollywood Looks Good on You,” I worked with a producer back in my hometown, and then, for “Midnight Kind of Love” and “For the Last Time,” I worked with a producer from Seattle. But with this new song, everything pretty much came from me.

From your time playing music and starting Dirty White Shoes, what’s one big thing you’ve taken away from it all?

One of the bigger ones that I think about a lot is, in church scenarios, many performers have this “stand-still” mindset, whereas I like to make it fun and do things that catch people’s attention, so I always give it my all. Even with worship or Christian songs, I make sure to perform at a level where I’d send out what I was feeling from deep inside. If there’s anything I’m thankful for, it’s the ability to perform in a way where I’m not embarrassed or ashamed, so people are able to know and feel what I feel.

I’d just like to thank them for being a part of the journey of Dirty White Shoes. We all have a pair of white shoes that we had dirtied once we went on the hike with that friend, or that first-time date. We’re all in this together. Keep going, don’t give up, and if there’s a level of uncertainty, just chase your dreams, know what your passions are, tell that person you love them if you love them – just go get ‘em!

I come from a family who is passionate about all things music. I learned to sing at an early age, and by 13, had my very own Fender Strat guitar. I tried my hardest at learning all that I could. Because I was born with cerebral palsy, I had to teach myself an adaptive playing style. I learned to write and record my own music, despite these difficulties. In college, I started making great use of my writing abilities by reviewing music, as well as copy editing. I guess it's best to stick with what you know, while welcoming a fair challenge at the same time.
Previous Purple Tone Flower’s Brand New Release “We Will Fight For Us”
Next Single Review: “Priceless Commodity” by David D’Angelo (ft. MayDay)