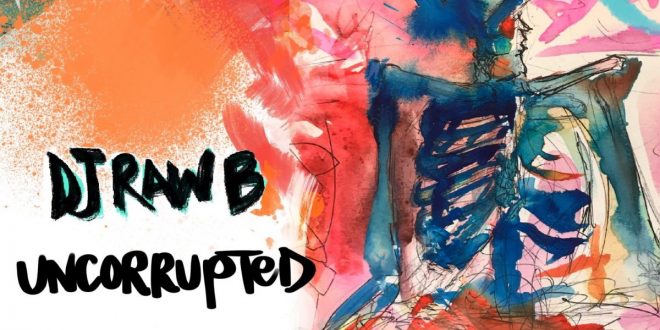 Back in the 90s, California-based Raw B catalyzed his career as co-host and DJ for the critically acclaimed underground rap-based show Beat Sauce. The show featured notable guest names in hip hop – everyone from Afrikka Bambatta and KRS-ONE to Jay Z and Eminem. As expected, his popularity as a DJ rose in conjunction with that of the show, earning him Best Local DJ in 2001 by the San Francisco Bay Guardian through his enduring presence in both the underground and mainstream club circuits. Throughout the next decade, he became known for his accomplishments in radio, namely KNBR’s Morning Show with Murph & Mac, as well as KMEL’s Sway in the Morning, hosted by rapper Sway Calloway.

Musically, after numerous collaborative efforts over nearly three decades, DJ Raw B has released his latest album Uncorrupted, following 2019’s Born Illness. From the transition between albums, Raw B’s new endeavor harkens back to a primarily old school hip hop foundation. On the opener, “Toscin” The accompaniment that plays alongside the breakbeat gives off a wave of nostalgia, just as much as the light to the vivid color tones of the album’s cover. The two tracks to follow, “Genesis” and “Kill Zone” (featuring Emcee Infinite and previous collaborator Luke Sick, respectively), also seem emphatic to the cover art, centering on a sense of burgeoning and subsequent resilience in the joy of art despite persistent hardships. I appreciate how the vibe fits into another instrumental track, “Unspeakable,” which could very well come across as a kind of dark disco. Its noir-esque bass holds prominence in the mix, while the sporadic, haunting synths accentuate the pacing. From the album’s mid-point, the Z-man-featured “Bad Man, Good Heart,” which rings pertinent in emphasizing the thematic angle. In the song’s context, even though one’s intentions may wholly be for good, they can sometimes be misunderstood, held back, and even be of stark contrast amidst continued tribulation. Further, the moods emanated from the following track, “Out of Body Experience,” seem to allude to a hazy, dreamlike state, as if the soul is continuing to wander on autopilot.

Toward the latter half of the album, there seem to be further nuances of experiencing an autopilot mentality. The Dan Wolf-led track “The MCA Song” (featuring the MCA-rapped chorus from the Beastie Boys’ “Alive”) ironically centers on death – given, on the surface, MCA’s passing, but in a broader context, the frequent, ongoing uncertainty around it. By the same token, Luke Sick’s “Cooler In the Cut” applies to the indifference that permeates one’s mind once they resort to a quick succession of violent measures. However, the album’s final track, “L.O.L” closes the album with a party rock/funk feel, and a refreshingly positive message to boot – lots of love. For the predominantly bleak direction that comprises the majority of the album, rapper Curtis Spicoli spreads a positive message of maintaining that love toward supporters, but also acknowledges the humble approach of forgiving, and ultimately blessing, those who otherwise appear to be a bad influence on one’s life.

Overall, DJ Raw B’s Uncorrupted is clear evidence that even the most established artists are capable of growth. While the old school inspired instrumentation provides a cool throwback, each featured rapper provides a piece of the album’s theme that is not only enhanced by their distinct flows and tonalities, but fits with the other firmly in terms of both progression and cohesion. Whether it’s another collaboration or solo effort, I’m definitely looking forward to what Raw B puts out down the line.

I come from a family who is passionate about all things music. I learned to sing at an early age, and by 13, had my very own Fender Strat guitar. I tried my hardest at learning all that I could. Because I was born with cerebral palsy, I had to teach myself an adaptive playing style. I learned to write and record my own music, despite these difficulties. In college, I started making great use of my writing abilities by reviewing music, as well as copy editing. I guess it's best to stick with what you know, while welcoming a fair challenge at the same time.
Previous Industrial Bass Artist SINTHETIK MESSIAH Announces The Release Of Split Damage
Next Poet Laureate Nominee Releases Tribute To Lost Loved Ones “I Will Tell Jesus You Said Hello”