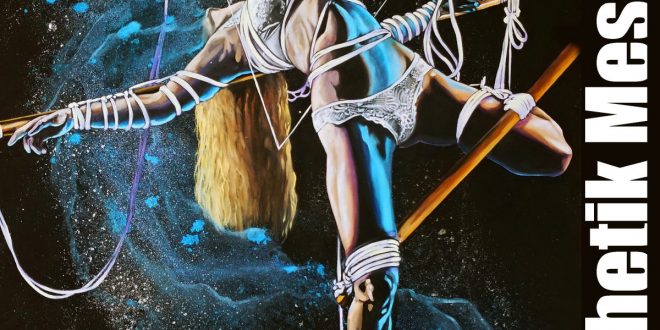 May 2, 2020 – “Industrial Bass” artist SINTHETIK MESSIAH has announced the release of Split Damage; a special 2-track EP that pushes the boundaries previously set by the artist, entering into a post-trip hop arena.

Split Damage consists of two tracks that were influenced by the 90’s trip-hop sound.

For fans of: Portishead, Poe, Massive Attack and many others.

Bug Gigabyte: All writing, production and performance
Ms. Cat Hall: Lyrics and female voice on “Languish”
Mr. Joe Haze: Mixing and mastering
Ms. Hall describes the lyrics and meaning of “Languish” as “a song that is about the pain of separation, longing-suffering that goes along with unrequited love. Always wanting to dive into those feelings and know that the love was personal and real, while bleeding from the frustration of being helpless to dull the sensation.”

Bug Gigabyte Describes “Emotional Therapy” as “a therapy session used to get past the first year anniversary of his birth mother passing away from stage 4 lung cancer.“