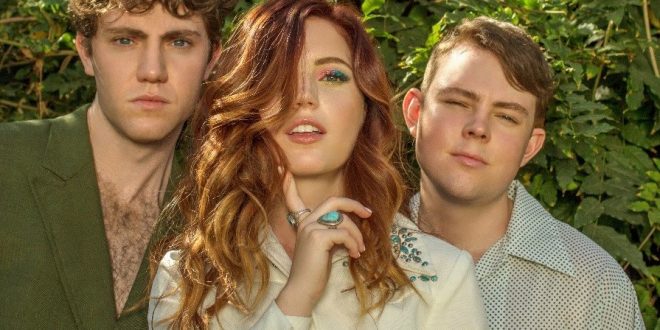 Multi-platinum trio Echosmith have released the video for their new song “Stuck” The video features the band participating in an avant-garde fashion show that includes a desert runway, pyrotechnics, and an unenthusiastic crowd.Directed by Danny Drysdale, the video is also the next visual chapter of the music videos Echosmith created to support each song on the album. “Stuck” is from the band’s sophomore album, Lonely Generation, out now, which reached #2 on the iTunes Pop Chart and #11 on the iTunes Overall Album Chart.

“No one wants to feel trapped, so we wanted to capture the feeling of that and the tension that comes with it, both in the song and the video. A random and deserted setting, with an over-the-top fashion show, with fire and explosions. Despite the glitz and glamour, no one is impressed, and it just makes you feel a bit strange. Capturing the tension that lies in the meaning of the song was important to us because it lets the lyrics have a life of its own,” says Sydney.

“Stuck” follows the release of the “Lost Somebody” video, where the band is leading an aerobics class to see who is the better instructor, and new single “Diamonds” which shines a light on the value of individuality, The bouncy lead single “Lonely Generation” addresses how it can feel lonely in this hyper-connected social media world and is a reminder to focus on real connection with each other. The video for the fun and flirty album track “Shut Up And Kiss Me” follows frontwoman Sydney Sierota trying to catch the attention of her love interest (her real-life husband, Cameron Quiseng, who she married last year) who will not take the hint and kiss her.

Beginning February 12th in Washington, DC, Echosmith will embark on their North American Lonely Generation Tour which will bring them to major cities from coast to coast before wrapping in Los Angeles on March 5th. Weathers and Jayden Bartels will support. Full routing below. Please visit www.echosmith.com for all ticketing details.

Echosmith recently appeared on top morning talk show Live with Kelly and Ryan where they filmed a live performance of “Diamonds”. The band also filmed a very special Live from the Artists Den performance in NYC – ahead of its 2020 airing on American Public Television, check out their performances of “Lonely Generation” and “Bright.”