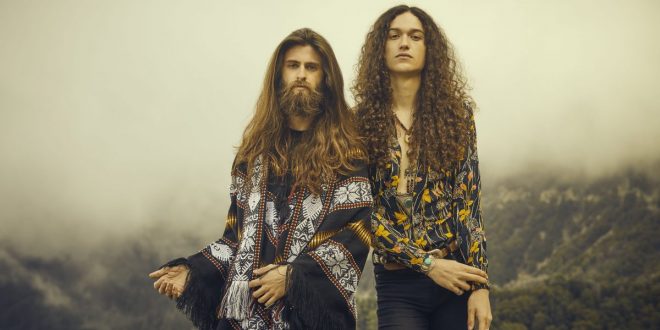 As the reincarnation of classic rock continues to thrive across the music business, more and more rock bands have been making their mark in a pop and hip hop driven industry. Crown Lands have been on the road supporting some of rock’s biggest acts today and have just embarked on a new chapter of their own. Music Existence spoke to Cody Bowles and Kevin Comeau from Crown Lands to talk about their newest single and touring with rock royalty.

Crown Lands started four years ago and always intended on staying a duo. The two musicians from Oshawa, Ontario met one night through former bandmates and have been writing and playing music together ever since.

“From the very beginning we felt that our chemistry worked really well and we didn’t really need another member to make this whole thing work. We just made do with what we had, and tried to fill out as much sound as possible for two people” says Bowles.

Often times rock duos can be difficult, as many purists believe bass players and supplementary guitar players are needed to complete a band’s sound. Crown Lands quickly diminishes that point of view with their captivating guitar solos and impressive vocalist who also happens to be their drummer.

Some might be skeptical at first, but Cody Bowles is a singing drummer who gets it right. His high-pitched howls might be reminiscent of both Robert Plant and Geddy Lee, but his talent doesn’t stop there. How he manages to maintain such vocal strength and clarity while simultaneously destroying his drum kit is a mystery we may never solve. Just ask Lzzy Hale from Halestorm, who tweeted out her admiration for the band and particularly noted Bowles’ voice as being “one of the most beautiful male voices” she’d ever heard.

The band’s famous enthusiasts don’t end there. Crown Lands has been asked to tour with everyone from Coheed and Cambria, Primus, Rival Sons and Jack White.

“Oh yeah! The White Stripes were a huge influence and it was pretty cool we got to do a tour with Jack. We’re one of the very few duos that I think he likes. I know he likes us and Twenty One Plilots” says Comeau.

Bowles continues, “Just to see that bar set of incredible musicianship and the way that they interact with their audience and how they hold themselves. It was really inspiring watching those bands because they’re such powerhouse acts.”

The Rival Sons connection sparked a special relationship for Crown Lands who recorded their full length debut album with Rival Sons producer Dave Cobb. Bowles explains how they were interested in Cobb initially, but the tour with Rival Sons solidified their decision.“He was on our list before hand, but touring with Rival Sons and having them tell us about how much of an awesome producer and person he was, really kind of swayed the decision…..We were really curious to see how he’d be with our sound because we’re obviously a different band, and it worked out great!”

The first single off the band’s debut LP is “Spit It Out,” a progressive and psychedelic track with an equally vibrant video directed by Travis Shinn. The spirited track will be exciting to play live especially as they get ready to embark on their first European tour this summer in support of Nashville based sister act Larkin Poe. Crown Lands will then head back home and celebrate with a headlining show at Toronto’s Mod Club, to a crowd of hometown fans who haven’t seen the band play since early 2019.

As the band embarks on a new era of Crown Lands music, Cody Bowles and Kevin Comeau are taking charge of the prog rock/psychedelic sound that has yet to be reinvented in recent years. The classic rock comeback which started in 2018 has primarily focused on blues based rock n’ roll, where bands like Greta Van Fleet and Dirty Honey have been thriving.

Crown Lands are writing their own story and are taking charge of music that matters. Their socially conscious lyrics and perceptive band name are both representative of issues that matter, as they use their music to fight the good fight. Make sure to catch Crown Lands live as their high spirited rock show is a spectacle you won’t want to miss.

*In Support of Larkin Poe