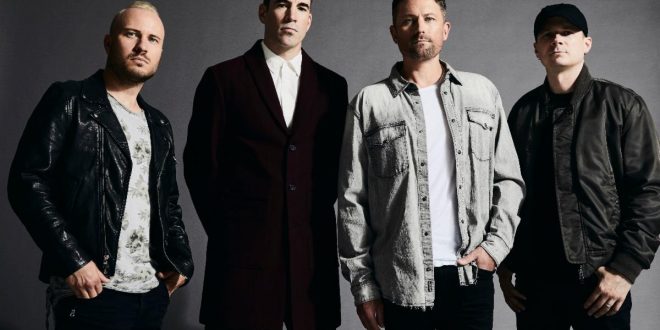 Multi-platinum band THEORY (Theory Of A Deadman) has released “World Keeps Spinning,” the latest track off their forthcoming studio album, Say Nothing, out next Friday, January 31st via Atlantic Records. The evocative song written by lead vocalist Tyler Connolly is a profound autobiographical track about depression and anxiety. On Say Nothing, THEORY are speaking up through timely lyrical commentary that finds the band’s finger on the pulse of the current climate and the issues that our society is grappling with today, threaded together with a message that’s both a cautionary warning and a hopeful wish for our collective future.

“One of the most personal songs I’ve ever written, ‘World Keeps Spinning’ discusses the battle with depression and anxiety, and the constant struggle between feeling great and feeling like ‘what’s the point,'” shares Connolly. “This is a song a lot of people are going to relate to.”
Say Nothing is available for pre-order at all DSPs and each pre-order includes instant downloads of previously released tracks “History of Violence,” “Say Nothing,” “Strangers,” and “World Keeps Spinning.” Pre-order Say Nothing HERE.
Canadian tour dates: