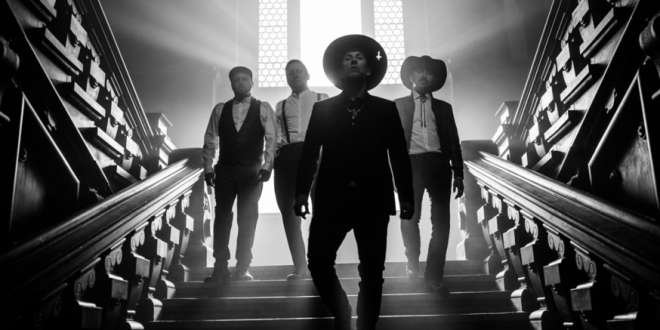 2
SHARES
FacebookTwitter
“They say love is a burden, that love brings you pain. I say love is the devil, it will drive you insane.”
The dark veil between Nergal’s enigmatic blackened blues project and its dedicated congregation has finally been lifted. Napalm Records is pleased to announce the official release ofMe and That Man’s sophomore full-length album, entitled ‘New Man, New Songs, Same Shit, Vol.1’, on March 27, 2020. It will be celebrated with a special record release show in London on the same day, including special guests from the album.
Three years after their initial debut, Me and That Man have returned with an offering that is indeed different from the first, but in no way less brilliant. The mysterious collective has surpassed themselves with their bewitching new collection – featuring ominous lyricism atop unfiltered blues, gothic-laced folk, outlaw country and Americana-influenced anthems. The enthralling album visits a completely new spectrum of dark desert vibes and sees notable heavy music icons such as Corey Taylor (Slipknot), Brent Hinds (Mastodon), Matt Heafy (Trivium), Ihsahn (Emperor) and Sivert Høyem (Madrugada) join the pact with the devil. ‘New Man, New Songs, Same Shit, Vol.1’ is a diversified, dynamic masterpiece that presents Nergal in a completely new light, providing a strong contrast to the heavier sounds of Behemoth. Evil has truly never sounded so good.
Nergal on New Man, New Songs, Same Shit, Vol.1:
“With the utmost pride and… kind of relief; I present to you, the second ME AND THAT MAN album – New Man, New Songs, Same Shit, Vol.1. This time round, I wanted to take on a different challenge and curated an album of 11 songs – each with their own character and vibe; alongside the most talented and important individuals across the whole scene – together, we take trips to the lands of Blues, Folk, Country and even Spaghetti Western. Only time will tell if we hit the mark, but I deeply believe so. I’m very proud of this piece of work and it has been a monumental task to achieve. I would like to thank EACH one of our guests for being part of this project: Mat & Matt, Niklas and Jørgen, Corey, Alan, Addi, Brent, Vegard, Sivert, Anders, Rob, Jerome, Johanna and Nicke. I LOVE you all from here to the moon and back! Without the passion and heart you granted us, this wouldn’t have been possible!”
Pre-Order New Man, New Songs, Same Shit, Vol.1 HERE!

NewYork Based Photographer. Music Enthusiast with a background in Graphic Design. Whether I'm shooting a live event or just out wondering the streets its about capturing the moment.
Previous Disciples Of Verity Release Official Music Video for “Lying To Myself” Featuring Phil Demmel
Next tētēma (Mike Patton/Anthony Pateras) Return with New Album ‘Necroscape’ and Release New Single “Haunted On The Uptake”