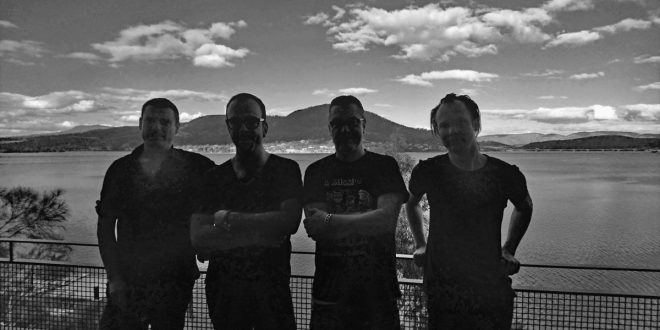 tētēma, the bi-continental outfit featuring Mike Patton (Faith No More, Mr. Bungle) and the Melbourne based, electro-acoustic artist Anthony Pateras, return with their sophomore album, the mind-bending ‘Necroscape,’ do out on April 3 via Ipecac Recordings.

An early preview of the Spring release can be heard now, with “Haunted On The Uptake,” a track Pateras describes as sounding “like The Melvins’ tour van broke down in the Balkans and instead of going home, they decide to open a mountain laboratory dedicated to possible hybrids of Rembetika and hardcore,” streaming now: https://smarturl.it/necroscape. Pre-orders are also available via that link.

Click the image for “Haunted On The Uptake” music video visualizer

‘Necroscape’ is sculpted around isolation in the surveillance age; and although lofty/high-concept sounding, it is still an intensely fun and heavy listen. Necroscape synthesizes a lot of territory: odd-time rock, musique concrète, otherworld grooves, soul, industrial noise, microtonal psychoacoustics… seemingly strange bedfellows on paper, yet they seamlessly coalesce into 13 songs which playfully challenge our notions of sonic logic and make you move at the same time. In a nutshell, listening to Necroscape creates the weird sensation of exclaiming “of course!” and “wtf?” simultaneously.

4. Haunted on the Uptake

NewYork Based Photographer. Music Enthusiast with a background in Graphic Design. Whether I'm shooting a live event or just out wondering the streets its about capturing the moment.
Previous Nergal’s Me and That Man Release Third Single and Official Video “Surrender”
Next Black Mirrors Releases Unplugged Video “Günther Kimmich”