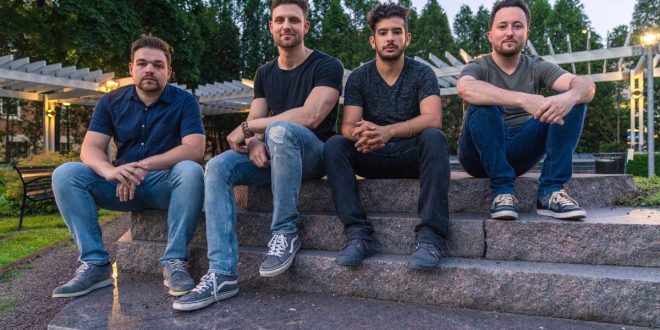 Back 2 Zero Release New Single & Music Video, “People Like Us”

Alternative rockers Back 2 Zero from Westchester, NY know there’s just some people you have to cut out of your life for one reason or another. You not only have to burn that bridge, but completely obliterate it with a few F-Bombs. Their new single “People Like Us” is an unapologetic rock anthem for the taken advantage of, the beaten down, and the screwed over. Replete with funky guitar licks, falsetto vocals and an explosive hook with some pretty confrontational lyrics, “People Like Us” arrives as a cathartic shout-along.

There’s a sense of urgency in the track can be attributed to the circumstance in which it was created. Vocalist Niko Emanuilidis explains “About a year ago I was home playing around on guitar like I usually do, plucking away trying to come up with some new song ideas, but I had to catch a train in a half hour for work. I stumbled across a cool chord progression I liked and the melody / lyrics for the chorus line ‘People like us, should never f%@$ around with people like you.’ I knew I had something good, but I had to run to catch the train. So I recorded the chord progression on my phone and as I sat on the train I came up with all the rest of the lyrics, melody, and basically wrote the entire song on that train ride.“

Back 2 Zero is comprised of four high school and college friends who don’t fit the typical mold of a rock band. The quartet never strive to fit into a particular scene, only to create authentic, heartfelt music about self-reflection, relationships, and life itself. July of 2017 marked the release of the band’s debut EP Here, Alone an almost eight month project that spawned the singles “Throw You Out” and “Drive,” pushing the band along even further in developing their unique sound.

“People Like Us” will be on Back 2 Zero’s upcoming debut full-length (release date TBA). Listen to the single now on Spotify.