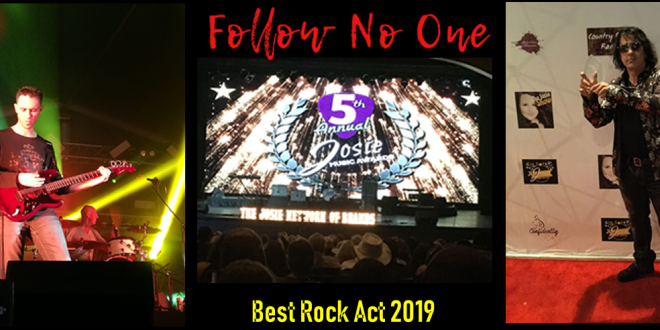 “We’re heading back to Colorado, and I’m happy to say, we’re heading back with a win! We just want to thank all the fans, because at the end of the day, that’s why we’re here.”— Rich Hall, Vocalist, Follow No One

International duo Follow No One has been channeling the best of rock’s past and present creative elements since their 2017 debut EP, “5.” Fans have been drawn to both the jaw-dropping guitar work of Portuguese native Pedro Murino Almeida and the powerful, melodic vocals of American-born Rich Hall. The pair’s distinctive new brand of rock was recently rewarded with one of indie music’s most sought-after and revered honors from the World’s Largest Independent Music Awards, the Josie Music Awards (JMA).

On September 21st, 2019, Follow No One received the JMA for Best Rock Act 2019, for their single, “Your Time of Dying.” https://open.spotify.com/track/0JZaDOS8vdkgT3JBmBcAPY

Following the win, Hall said, “We’re heading back to Colorado, and I’m happy to say, we’re heading back with a win! We just want to thank all the fans, because at the end of the day, that’s why we’re here.” https://youtu.be/3SsSvYA8KwM

Follow No One’s current single, “Fear No Evil” is available at radio and on all digital music outlets. https://open.spotify.com/track/1bXMPkGkf4j8XYj4hZIc57?si=AAiYPaRBQhqbbX2yGK-vsQ

ABOUT THE JOSIE MUSIC AWARDS: The Josie Music Awards is an all genre music award show ceremony which includes a lavish red carpet and many performances. The Josie Music Awards is a brand of The Josie Network, LLC owned by the highly-respected partnership team of Josie Passantino and Tinamarie Passantino. This team set out and successfully created an award show where winners are selected on their talent, skill, material, professionalism, and more and NOT by button pressing voting. Nominee suggestions go through a lengthy review process by a team of industry leaders and the official nomination list is created from their final decisions. Winners are also selected by this industry leader team (this review team has no connection to independent artists).

Rich Hall is an American-born singer/songwriter & pianist and all things synth. Rich began performing at a young age in theater, but found his true calling performing & writing music. Rich currently resides in Colorado.

Pedro Murino Almeida is a native of Portugal with roots in Brazil, classically trained in composition & a guitar virtuoso in his own right. His work has been featured in film & video, as well as a successful career involving his own musical acts.