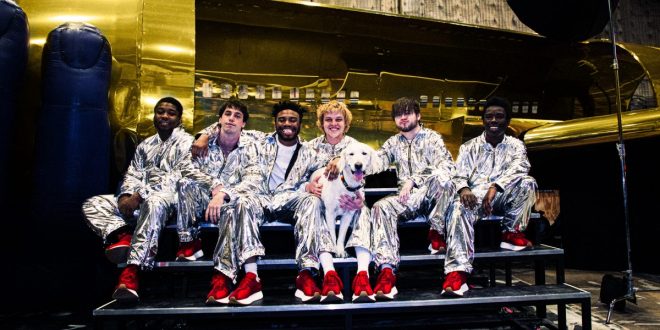 Right on the heels of the release of their fifth studio album, GINGER, Brockhampton have announced a headlining North American tour. The Heaven Belongs To You tour will kick off October 26th in Vancouver with stops in Austin, Atlanta and New York before concluding December 13th in Los Angeles. UK rapper slowthai is set to open on all November and December tour dates except for festival stops. All tickets are available here.

GINGER arrived last week via Question Everything/RCA Records and includes previously released songs “No Halo,” “If You Pray Right,” “I Been Born Again,” and “Boy Bye.”

The tour announcement follows the news of their upcoming set at Tyler, The Creator’s 8th annual Camp Flog Gnaw Carnival where they will play alongside Solange, YG, and Tyler himself. Earlier this summer, the boy band made a triumphant return to the stage at Governor’s Ball which launched a run of summer festival dates. This spring saw the release of Kevin Abstract’s critically acclaimed solo album ARIZONA BABY.

Following the release of their first 3 studio albums in 2017, the boy band’s first major label album, Iridescence, debuted at #1 on the Billboard 200 and R&B/Hip-Hop charts last year. The group also toured the globe extensively in 2018, including a run of 5-star reviewed, sold-out European tour dates, a sold-out tour of Australia and New Zealand, and a successful North American tour highlighted by a sold-out three-night residency at New York’s Terminal 5 and a sold-out two-night residency at Los Angeles’ The Shrine.