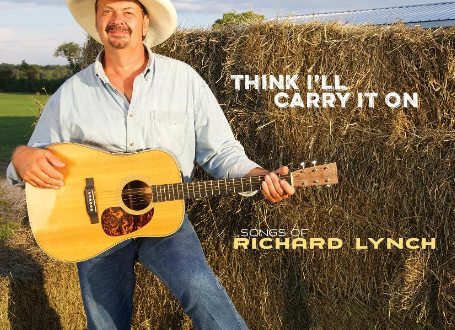 The worldwide release of the album is scheduled for May 25th, 2019. It contains no less than 4 Top 40 country singles, including “Keyboard Cowboy.”

Make no mistake friend: this isn’t today’s ‘country. This is PURE country. TRUE country. REAL country…the way it was intended, with songs that will last a lifetime…”— Michael Stover, President of MTS Management Group

Back in 1962, when Richard Lynch was born into this world, country music was just that…country. It was a year when George Jones, Jim Reeves, Patsy Cline and Johnny Cash ruled the airwaves; their aching and emotive voices echoing from the car speakers of your dad’s ’62 Chevy Impala. These were true-to-life songs about love and living, heartache and heartbreak, drinkin’ and thinkin’, with honest-to-God “every-man” stories in the lyrics. Flash-forward 50-plus years, and country music just isn’t what it used to be. You turn on the TV and see some of the acts being called “country” and you wonder, how that can be? Where is the wailing of the pedal steel? Where are the fast and furious fiddles? Where are the cowboy hats, worn by men who actually know what it’s like to put in a hard day’s work on a farm? I’ll tell you where all those things are…in Richard Lynch’s music.

With his May 25th, 2019 album release, “Think I’ll Carry It On,” Richard Lynch is doing just that…carrying on the traditions of “real” country music. Traditions that were passed down to him from his father, who was both a country musician and mentor. Richard has put his personal stamp on each and every song, having written or co-written them all. While there’s a deliberate feeling of nostalgia wrapped in the words sung by Lynch, he has a way of bringing the ghosts from the past into the living present, turning “classic” into “contemporary.” He’s not pretending to be something he’s not…he’s pure cowboy country, from the sweat on his brow, to the dirt on his boots.

“Make no mistake friends, this isn’t today’s ‘country,…there’s no cornfield parties, ‘girl get in my truck’ lyrics, tailgate drops, bumpin’ bass and rap, or ‘bros’ to be found,” said Michael Stover of MTS Management Group. “This is PURE country. TRUE country. REAL country…the way it was intended, with songs that will last a lifetime, building bridges across time and from generation to generation. They have heart, soul, and substance.”