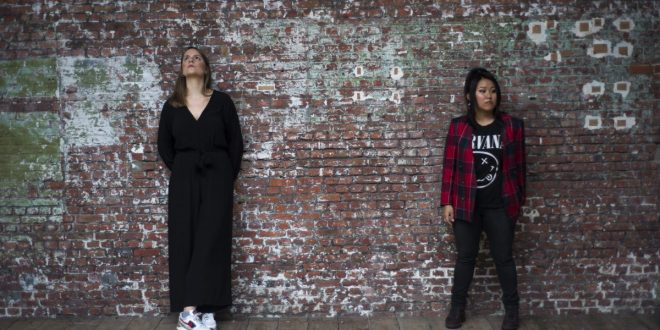 DEKALOG comprises of producer Sonny Dhanowa and songwriter Dan Roberts. This partnership’s signature sound runs through the core of their music with a style that heralds creativity, craft and artistic dynamism – and their goal: Ten albums with ten tracks over ten years

For their debut album, entitled ‘Een’, they’ve added talent in the form of singer Fien Desmet and rapper Amazumi.

DEKALOG encompasses a hybrid sound that puts a flavourful spin on the Alt-Pop and Hip Hop/Trip Hop genres; delving into different elements in each song to showcase every angle of the band’s talent and craft. Their music puts a dark spin on the Pop genre and really explores the full spectrum of raw emotion. It’s an edge-of-your seat listening experience for all those who want to delve into what lies beneath.

With the members hailing from Antwerp, Belgium, and London, England each of them brings their own musicality to the table and bind together the chemical elements at the heart of DEKALOG’s. The band has since emerged from the studio and are ready to release an album of songs that showcase the dynamism of the dual-vocalists. Add even more talent, in the form of other guest musicians from literally all corners of the world; whose contributions enhance the album with additional flavour. It’s an international, collective effort – a true syndicate – more than a standard project or studio session output. This is an album of collaboration and innovation, and the group is excited to show the world what is delivered through this record.

The end result is a musical journey that explores deep and dark emotions, with just a tinge of dystopia. Orchestral but not bombastic, eclectic without ever losing focus, DEKALOG is the soundtrack for these mad, disjointed and intense times we live in.

The influences on DEKALOG are many (starting with Kieślowski’s acclaimed series of films with the same title), but the vision behind the music will make each new episode part of an emotional and sprawling tale of adventure.

The debut album, titled “Een”, is the first instalment of a ten-part project that will be released through band member Sonny Dhanowa’s label Blue Ghost Records, and will officially drop on January 19th, 2019

BLUE GHOST – Originally conceived as a platform for founder Sonny Dhanowa to release any and all of his new music through, Blue Ghost is also an umbrella organization that will incorporate eclectic music releases with a striking visual design. The artists will come from Sonny’s extensive network, which can truly be described as “worldwide”, and there is a distinct focus on collaborative projects that incorporate many creative talents without any boundaries.

An eternal wanderer, Sonny conceived of the name Blue Ghost to express how he feels sometimes – a perpetual nomad who can be lost, lonely and without purpose wherever he arrives. Hailing from Bristol and moving through London, Barcelona and now Antwerp, he set up Blue Ghost to become a creative hub that can bring together the many creative forces he has encountered throughout his journeys.

The first release on Blue Ghost will be ‘DEKALOG’ (out 19/01/19). The project incorporates contributions from different vocalists, as well as an extensive list of musicians from literally all corners of the world. All contributions were conducted and arranged by Sonny, creating a rich aural tapestry that has faint echoes from the trip-hop era, but achieves a quality and personality that is all its own.

Sonny Dhanowa is a true, nomadic globetrotter, both deejaying and promoting where ever he lays his head – Bristol to London to Barcelona to Antwerp. He has been a breaker, a scratch deejay, an mc, and has produced various albums and EPs before.

Sonny works with a bevy of world-wide musicians and like a movie producer, assembles a cast of characters to appear in an extensive sonic landscape he has constructed around his songs. And then like a director, he weaves all the performances together into a thrilling story.

Dan Roberts is an elusive, South London based songwriter who has worked on various eclectic projects throughout his extensive, underground music career. He is an established composer, lyricist and when the need calls, a session guitarist.

Dan is proficient in both the electric and acoustic guitars, and thus has played in various musical outfits across the UK. In additional, he has written and performed his own solo folk-based material. He now carves a niche collaborating online with individual projects that place a specific emphasis on creativity.

Fake News: Dan is currently living in the Los Angeles underground as a fugitive to the law – evading the charge of public onanism, thus so, Dan remains the ‘ghost member’ of the DEKALOG duo.

Fien Desmet is an accomplished and versatile Belgium singer, songwriter and composer. She started composing her own music at a very early age and was soon performing on various stages around the country, where she captivated audiences with her unique voice and piano playing.

Fien studied Jazz at the Royal Conservatory in Antwerp, where she obtained her master’s degree and was tutored by Tutu Puoane, Kristina Fuchs, Barbara Wiernik, Inge Minten and Kurt Van Herck, amongst others.

She is currently part of several musical projects, such as her own band ‘MAY’, the duo ‘Tumla’ (with double bassist Anneleen Boehme), the jazz trio ‘Wolf trio’ with Marjan Van Rompay and Wout Gooris and the vocal ensemble ‘Birds on a Wire’. She also writes music for theatre (the socially-artistic theatre group Tutti Fratelli being her latest project).

She likes to challenge herself constantly in finding new musical adventures to explore her voice and her way of approaching music.

AMAZUMI is a Nepalese artist raised in Hong Kong who began actively pursuing music in London, 2010 whilst making a documentary about an artist based in Belgium. She began honing her skills in local cyphers, open mics and self-organised events, and found herself taking her music further in Gent with a nurturing artistic community that provided her the perfect nest to grow and create a sound of her own.

Previously known as Zulu Moon, she has been regularly performing in venues and festivals all over Belgium since 2012, making radio appearances and scoring a national buzz in 2017 as one of the 7 finalists of De Nieuwe Lichting. Making her debut as AMAZUMI on the Ancienne Belgique main stage after releasing her new single V for Venom (which is also a self-titled track of her debut EP), her music video circulated daily on XITE channel, premiered on Chase.be, Flus.be and De Standaard.

Infusing the grungy & nu-metal sounds of Nirvana & RATM she grew up with and sharpening her lyrical blades with OG influences of Jean Grae, Zack De La Rocha as well as newer artists like Show me the Body, J. Cole, Kendrick Lamar, Boog Brown & Loyle Carner – her flow is ballsy without the pretentious arrogance and vanilla smooth on lighter days. You can never tell what’s coming next. She is currently residing in the UK and working on a series project ‘Amazumi in Exile’.

Amazumi is a true master of the dark, lyrical arts.

Stephen Vicino is the founder of MusicExistence.com. He created this site to give talented musicians a voice and a way to be discovered.
@@svicino
Previous Former Extreme Athlete Launches Hard Rock Band – Head Movement
Next Nocturne by Secret Garden for classical guitar. Adaption by Angelos Tsoutsis