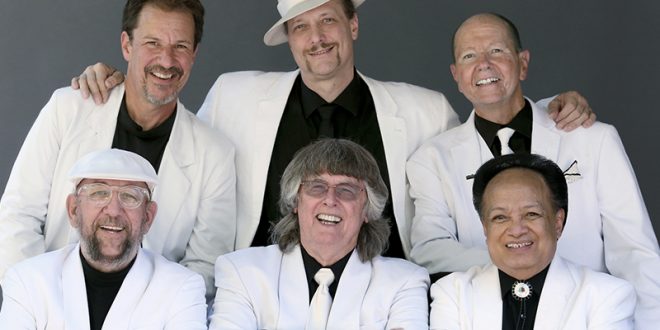 Back in the mid-to-late 60s, The Association made a name as one of the era’s most successful groups. Their act was based on rotating lead vocal duties between all members, spacious guitar melodies, and lush production, which proved innovative for the time. The band has assumed numerous incarnations over the years, with their sextet form persevering to this day. For nearly half a decade, it has consisted of lead guitarists Jules Alexander and Paul Holland, rhythm guitarist Jim Yester, bassist Del Ramos, keyboardist Jordan Cole, and drummer Bruce Pictor. Their latest offering is Windy, a 20-song retrospective named after one of their many enduring hits.

Yester, who played with The Association since their very second incarnation, was open to discussing their musical significance and history. While the band is currently on break this month, they will resume a steady touring run the next month, “We’ve got four concerts at the beginning of March, and the gigs keep coming. We probably have 16 or so on the books already, and we’re just taking them one at a time,” he says.

The Association’s career celebration, held in Los Angeles’s Village studio on the 19th of January, marked a poignant testament to their legacy. An exclusive concert in the widest sense, it seated an intimate audience of several hundred and honored every member from each lineup, past and present. “A guy by the name of Bennett Zimmerman presented the six of us with what he calls Rock Justice Awards. He’s always been a big fan of the band,” says Yester. “Ted Bluechel, Russ Giguere, and Terry Kirkman didn’t perform with us, but they did attend and were able to meet the fans. We had quite a long meet-and-greet after the show. It was really nice.”

On the topic of the band’s career catalyst, Yester explained the significance of their debut single and first national hit, 1965’s “Along Comes Mary,” which played a large part in establishing their initial commercial prominence.

“Before we started performing anywhere, we would spend six months of the year just on our act. We rehearsed, wrote, and worked on choreography. To make money during that time, musicians would play on demo sessions for other people. After seeing which roles worked best for each member, Jules ended up playing bass on what would become ‘Along Comes Mary.’ We tried that out one night, and the next day, we put the song in our act. It’s a killer song with a great sound.”

After making headway with a few non-LP singles, the band conquered a hurdle when aiming to flesh out their iconic track in the studio.

“We had to convince our label at the time, Valiant Records, to let a friend of ours, Curt Boettcher, produce it for us. They finally agreed and would also allow him to produce our first album [1966’s And Then Along Comes…The Association]. The album included ‘Along Comes Mary’ and ‘Cherish,’ so that was a good start. ’Along Comes Mary’ was written by another friend of ours, Tandyn Almer. He was a real wordsmith, and the lyrics are incredible. If and when I get the chance to simply perform the song as a reading, it blows people away!”

For all their eventual laser-focused efforts in shaping the band’s identity, The Association’s formation was more or less spontaneous. “It happened as a result of a happy accident at a hootenanny,” Yester recalls.

“There was this bunch of guys at the Troubadour on Monday nights, at what you’d nowadays call an open mic. They were either playing in groups, or looking to get in them, and would harass the people who played on stage (laughs)! Occasionally, they’d get up there and sing, calling themselves The Inner-Tubes, and would switch members from time to time. Eventually, the owner of the club wanted a group who could perform like that but for real, similar to The New Christie Minstrels. That was around mid-1964.“

“One night,” he continues, “11 or so guys showed up and they became a group called The Men. That was a combination of folk instruments, electric guitars, electric bass, and standup bass, and they stirred up quite a bit of dust in Hollywood. After six months, they split up, and six of the members would become The Association.”

By the next year, Birmingham, Alabama-born and Burbank, California-raised Yester aimed to try his hand at LA’s music scene, having just completed his service in the army.

“I’d gotten an audition at the Troubadour and played Wednesday nights at the Ice House. Bob Stane, the owner, pulled me aside and said, ‘Good news, these guys have put together a new group’ – which was The Association, who had only been together for two weeks – ‘and they want you to call them.’ They were looking to replace one of the guys; he was a banjo player with a bit of an attitude. Then, I sang for them, and they sang for me. Jules told me, ‘Come back in three days and you can move in’. So, I moved in, and that was my beginning with the band.”

Considering The Association’s nuanced sound, early critics dubbed them “sunshine pop,” a term still widely synonymized with the band. Though it is one with which Yester wholeheartedly disagrees, it seems to be a partial contributor to their accessibility with listeners.

“Man, I hated the label sunshine pop,” he laughs. “People didn’t know what to call us because we were all over the place. We weren’t heavy metal, we weren’t acid, we weren’t folk (anymore). We were rock n’ roll, a little bit of jazz – a little bit of everything! ‘Along Comes Mary’ would maybe reach number seven in the country, and once DJs warmed up to us, we were actually getting ready to release ‘Enter the Young.’ But then we thought through it and chose ‘Cherish’ instead, and that went to number one, so we were on our way!”

Indeed, the cogs of The Association’s sound were especially stimulated in their well-blended vocals. This asset is aptly demonstrated on their most successful hits, “Never My Love” and “Windy,” each co-led by the late great Larry Ramos (Alexander’s fill-in), who joined in March 1967. “Larry sang ‘Never My Love’ with Russ Giguere and ‘Windy’ with Terry Kirkman.” “We’d approach every song differently, trying to figure out which singers sounded best together, and his voice had a distinct tone,” Yester remarks, adding, “Both were really monster songs; it’s hard to mess with good material.”

He continues, “‘Never My Love’ was written by Don and Dick Addrisi. The two had a group of their own, The Addrisi Brothers, and were our labelmates on Valiant Records. They wrote really nice stuff for us. ‘Windy’ was done by a girlfriend of ours, Ruthann Friedman, another great performer, whose lyrics were very avant-garde. Most of the time, they were about drugs, the acid scene, and all that was going on. She went to San Francisco one weekend with the intention of writing a contemporary song. Once she got it ready, we worked on it and played it for our producer, Bones Howe. He really liked it, and we included it on our third album, Insight Out.“

Ultimately, one of the more overlooked aspects of The Association lies in their revolving lineup. Rather than come across as a fickly unstable machine that switches modes seemingly by the day, the lineup has always been rooted in genuine unity. “It’s family, and longtime friends,” Yester emphasizes of the current band. “Our keyboardist, Jordan, is the son of Brian Cole, our original bass player. He’s been with us for about 18 years now. Our current bass player is Larry Ramos’s younger brother, Del. He’s made a mark on his own and has toured all over the country. Our drummer Bruce Pictor has been with us since about ’84, and one of our guitarists, Paul Holland, has been with us since the 80s and 90s. We’re having so much fun, we sound great, and the people are loving it.”

When asked if there was anything Yester would like to say to his fans, he’d humbly conclude our chat with a short, yet sweet, “Thanks for the memories!”

I come from a family who is passionate about all things music. I learned to sing at an early age, and by 13, had my very own Fender Strat guitar. I tried my hardest at learning all that I could. Because I was born with cerebral palsy, I had to teach myself an adaptive playing style. I learned to write and record my own music, despite these difficulties. In college, I started making great use of my writing abilities by reviewing music, as well as copy editing. I guess it's best to stick with what you know, while welcoming a fair challenge at the same time.
Previous VHS Collection debuts new single “Dreaming”
Next The Faim to join Andy Black on spring North American tour