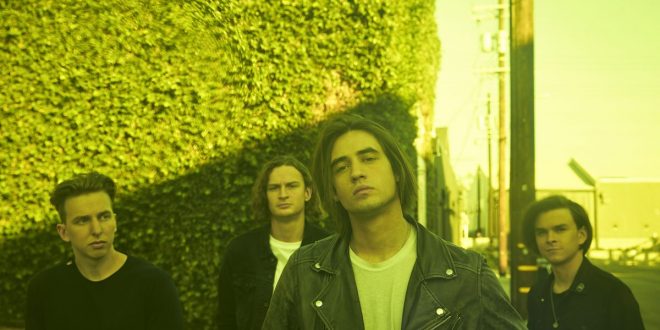 Rising pop-rock group, The Faim, will be joining Black Veil Brides’ frontman, Andy Black, on a massive North American tour this spring in support of their debut EP, Summer Is a Curse (2018 via BMG). The band will provide direct support on the 28-date trek runs that throughout April and May, kicking off in Sacramento, CA on Sunday, April 7 and wrapping in Virginia Beach, VA on Friday, May 17. The run also hits major cities including Los Angeles, Atlanta, New York, Chicago, and Toronto. The full list of shows is included below. Tickets go on sale this Friday, February 15 and can be purchased HERE.

“We couldn’t be more excited to be supporting Andy Black on his tour across the USA and Canada! These will be our first ever Canadian shows and our second tour of the U.S., so we’re looking forward to performing for both familiar and brand new faces on the road,” says the band.

The Faim have also released the official music video for “Fire,” the lead single from their forthcoming debut album. The ‘fire’ in the song refers to the quartet’s burning passion to create, express themselves, and grow as musicians. The video was filmed just south of London and captures frontman Josh Raven at different stages in his life. The footage also features an energetic and engaging live performance from the band, highlighting that inner drive and desire to succeed. Fans can watch the new offering HERE, and the song is available to stream and download on digital retailers HERE.

“Fire” has already secured notable playlisting, including Spotify’s New Music Friday (France, Netherlands), New Noise, and Pop Rock Shot, as well as Apple Music’s Breaking Alternative (40 countries), A-List Alternative (Germany), and Best of the Week (Austria). “Make Believe,” a standout track from the group’s Summer Is a Curse EP, was also played on a recent episode of Legacies on The CW and subsequently landed on Spotify’sFilm & TV Favorites sync playlist.

The Faim is currently on their first ever headline tour, resulting in numerous sold out shows in Melbourne, Brisbane, Sydney, and their hometown of Perth in January. Their European headline run has also produced sold-out dates in London, Southampton, Birmingham, Amsterdam, Cologne, and Hamburg, not to mention eight venue upgrades due to popular demand.

The four-piece will be releasing more new music soon, with their first full-length LP slated for release in the fall. Stay tuned for more news to come, and keep up with the band on social media below.

Previous Interview: Jim Yester of The Association talks career celebration, early days, essence of unity
Next Over Kill – “The Wings Of War”