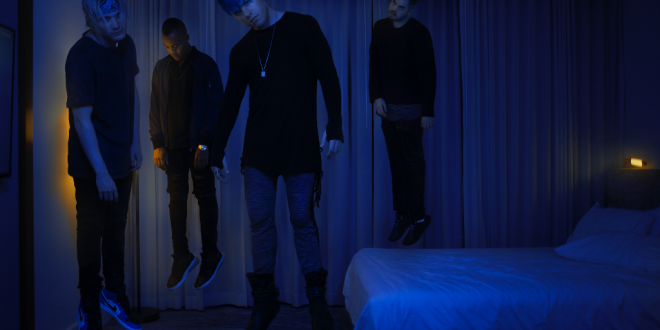 Set It Off have shared two new songs from their forthcoming Fearless Records debut Midnight, out February 1.

Listen to “For You Forever” and “Dancing With the Devil.”

The band is dropping two new songs at the same time for a very specific reason. Set It Off are seeking fan input and assistance in deciding which track should get a proper music video. All details regarding how to vote are here.

The band will announce which song fans voted for on New Year’s Day.

To help with the decision-making process, singer Cody Carson offered insight into both songs.

“‘Dancing With the Devil’ is a story of betrayal,” he said. “It unfortunately happens more often than it should that I someone we work with or someone we get close to in our lives feeds us lines of support and love, reels us in with a false sense of connection, and then whenever they feel like we can’t feed their needs, they cut the line and watch us drown. To me, that severance is fuel. That betrayal and abandonment is a reason to prove something, and the chip on the shoulder grows. This world is a tough place, but we have to be tougher and keep our eyes open so we don’t end up ‘Dancing With the Devil.'”

About “For You Forever,” Carson said, “[It’s] is my way of putting myself in the shoes of someone else when I was single. I was stubborn, I didn’t want a serious relationship, and I’d always let the other person know that. However, sometimes feelings grew, and I pushed them away because I felt I wasn’t ready, but it wouldn’t always stop them from waiting for me. This song collects the multitude of emotions that circulated through those situations from start, to end, to even how their friends may have advised them. It was a seriously humbling and vulnerable song to write, but sometimes you have to call yourself out.”

Midnight is available for pre-order here and was produced by Mike Green (Neck Deep, All Time Low, State Champs) with additional production by Brandon Paddock (Panic! At the Disco, Papa Roach, The Used, Daughtry).

The band previously shared the music video for the upbeat and effervescent new track “Lonely Dance.” Watch the clip, which takes place on a spaceship and features the band as astronauts, here. The video followed the previously released track “Killer In The Mirror.”

Midnight demonstrates a depth and breadth of musicianship. Carson played clarinet and guitarist Dan Clermont played trumpet on the record, while the band also incorporated live strings, live horns, and a live gospel choir into the album. Midnight also includes intricate, instrumental features by Reel Big Fish’s Matt Appleton and Issues’ Skyler Accord, as well as a vocal feature by Wayfarers.

Set It Off will also embark on a North American headline tour around album release. All dates are below. The band has confirmed With Confidence and (super whatevr) as support acts.