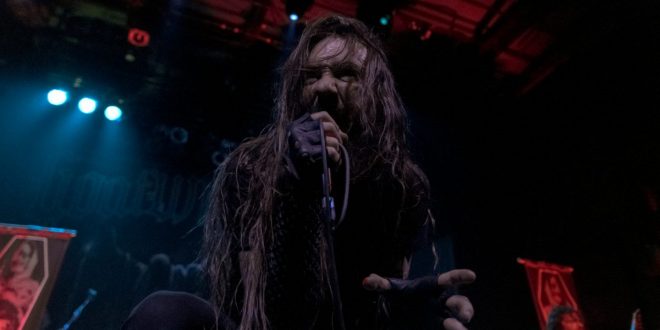 Louisiana’s Goatwhore brought the Metal Alliance Tour to New York City’s Gramercy Theatre Wednesday November 28th. Getting right down to business Goatwhore wasted no time and opened their set strong with “An End to Nothing”. Guitarist Sammy Duet went speeding through the powerful guitar riffs sending the crowd straight into a frenzied circle of friendly fisticuffs. With frontman Ben Falgoust in your face snarling voice leading the way through all the fan favorites like “Baring teeth for Revolt”, “Apocalyptic Havoc” and “Vengeful Ascension”, touring bassist Robert “TA” Coleman’s energy shined through the bands entire performance as drummer Zach Simmons pounded away on the skins like a beast.

Goatwhore without a doubt put on a powerful and amazing performance that evening. The bands sound and energy was as always top notch and the usually tough crowd of NYC appreciated every bit they band poured out for them. Goatwhore to me has always been a must see live band. Goatwhore’s music alone is heavy and powerful and can stand on its own, but live the band brings a whole other dimension to the music one you could only understand by witnessing live.

NewYork Based Photographer. Music Enthusiast with a background in Graphic Design. Whether I'm shooting a live event or just out wondering the streets its about capturing the moment.
Previous Gallery and Review: The Casualties at Gramercy Theatre New York City 11/28/18
Next Single Review: Glorious – “Move”