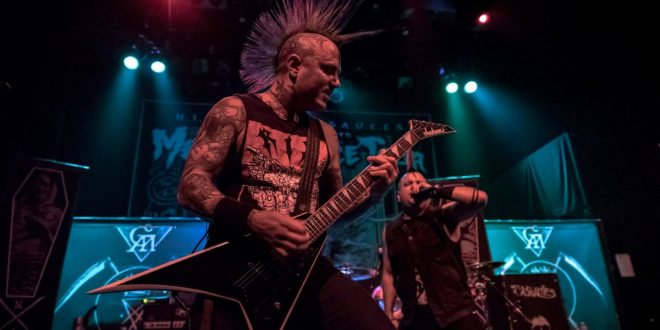 On Wednesday night November 28th, The Casualties returned home to NYC on the Metal Alliance Tour to play Gramercy Theatre. After starting the band in 1990, vocalist Jorge Herrera would announce on July 11th , 2017 he would be retiring from the band.  Replacing Herrera with The Krum Bums frontman David Rodriguez proved to bring new life to the band.

Fresh off the release of Written in Blood the bands 11th studio album and first ever to feature Rodriguez, The Casualties took to the stage and were greeted by the hometown crowd with a great ovation of cheers. With sheer force and they got right into the new album as the band started off their set with “Feed Off Fear”.  Diving back into the classics with “Under Attack” Rodriguez in typical punk fashion took to the pit along with fans and kicked off a wall of death. With a large circle pit brewing Rodriguez continued to engage with fans during “War Is Business’ before returning back onto the stage.

With the new blood of frontman David Rodriguez along with the longtime classic lineup of guitarist Jake Kolatis, drummer Marc Eggers (Meggers) and bassist Rick Lopez, The Casualties would not disappoint the hometown fans hungry for their classic NYC punk sound. As Rodriguez introduced “Borders” he encouraged the crowd to hold their middle fingers up high in the sky for President Trump before strongly voicing his opposition on the presidents stance on the countries border policies. Before ending their set Rodriguez spotted a young kid in the front of the crowd, telling security in the pit to get him up on stage, Rodriguez then told the crowd “I want this kid to remember this show for the rest of his life”,  with his arm around the young fan Rodriguez belted out the lyrics to “We Are We Have” as the band ended their set.

If anyone had any doubts about a band replacing the original singer of almost 30 years with someone new and being able to pull it off, Im here to tell you that The Casualties did it, and did it well.

NewYork Based Photographer. Music Enthusiast with a background in Graphic Design. Whether I'm shooting a live event or just out wondering the streets its about capturing the moment.
Previous Single Review: Katiah One – “Tail Spin”
Next Gallery and Review: Goatwhore at Gramercy Theatre New York City 11/28/18