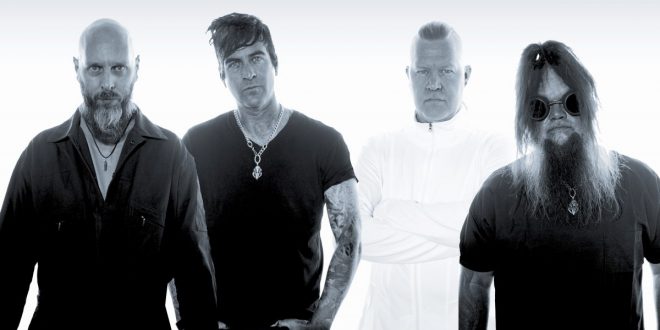 Three years from their formation and subsequent debut album, Natural Causes, the band is preparing for the release of The Real Now, their sophomore effort, slated for November 2nd. I caught up with front man Billy Keeton to discuss his formative days with Skrape, the transition into Audiotopsy, and the making of The Real Now.

ME: Take me back a bit to when you were growing up. Which bands helped deeply impact your musicianship?

Billy: I would say that Led Zeppelin was probably the first. I was also really into straight up metal back in those days, like Dokken, Ratt, and Judas Priest. Those were the bands who definitely influenced me at a young age.

ME: I can see where those influences came together in your band Skrape. What I found funny was that Skrape were from Orlando, and coincidentally, I live in Tampa. Another thing is I was just reminded of the song “Waste,” from playing X-Games skateboarding when I was 10 years old.

ME: During your time together, you developed quite a following, even though you didn’t play live that much, and teen pop was huge. How did it feel to get signed to a major label, especially with those circumstances?

Billy: To be honest with you, we’ve never really known the answer. Our band just kind of came out of nowhere and we started playing some gigs locally. After a certain point, we realized that we didn’t need to play all the time. The times that we did play, we’d try to make it a special event. And back in those days, doing those types of shows worked to our advantage. At the time, there weren’t many bands like Skrape, doing what we were doing, so it was easy to get signed for sure.

ME: The end of Skrape came when Up the Dose wasn’t promoted, due to the takeover of J Records. If that trouble didn’t happen, would Audiotopsy still have formed?

Billy: Oh yeah, absolutely. We’d done all we could with Skrape and were pretty much done anyway by 2005. Audiotopsy is a brand new band, and we’ve been going strong for over two years now.

ME: What went on right before Audiotopsy came together?

Billy: I had gotten a few phone calls from Greg, and he basically asked me if I would be interested in singing over some music he was working on at that time. That’s how Natural Causes got started, then it came out and we toured. Now, we have the second record. It’s the same process for this one; we would just share files with one another and make songs from there.

ME: So it’s always been a long distance collaboration for writing the songs, right?

Billy: Yeah, for us, it worked out great! We were able to bounce ideas off each other, build the songs that way, and make them special. It takes a little time, you know what I mean? But everyone’s got a home studio, so that’s how we’ve been doing it.

ME: My first time hearing Audiotopsy was when Natural Causes came out, and that was such a solid album. What can you tell me about the transition from that, and going into The Real Now?

Billy: Man, it’s flying leaps between the first and second record, no doubt about it! Over the years, all of us developed an ability to write, record, and produce our own music. And when this record finally came together, the songwriting aspect was super easy and natural.

ME: The first single for the album is “What Am I.” Can you tell me about how that song came about in the writing process?

Billy: It was basically written from the point of taking a second look at yourself and wondering who you are. It’s when you take a step outside yourself after falling victim to the lies you’ve been fed, about how you see yourself and what you believe in.

ME: I felt that in a thematic sense when listening to Natural Causes, and this new album is the extension of it.

Billy: Absolutely, man. We’re super excited about it, mainly because we have a different mixer for this one.

ME: You went from Tim Laud to Dave Fortman, right?

Billy: Yeah, pretty much. Tim is a great guy, and a local hero in Orlando. At the time of Natural Causes, we didn’t really think anything about it; we just kind of jumped in the studio and went for it. It definitely sounded good enough for us to have somebody like Jay Baumgardner mix it.

But for The Real Now, it’s a little bit of a different approach. Once we had all the songs written, everyone did their parts individually in the towns they were living in. Matt did the drums in Wisconsin up in his home studio, Greg did all the guitars in Dallas, Perry did all the bass here locally, and I was in New Orleans doing the vocals with Dave Fortman. Greg went up there too, and then from there, Dave mixed the record. That’s pretty much how it all went down.

ME: From what I gather, with the first album, you were testing the waters. With this one, though, you’re more deeply and individually involved in the process.

Billy: Yeah! I’d say you’re right on with that. It’s that chemistry developing. You know, when you’re starting out and recording your first record, sometimes you never really have the chance to be a band (laughs). But once you’re given the opportunity again, that’s when you really come together. And that’s what you’re getting with this new Audiotopsy record.

ME: To me, it’s not just your lyrics that still resonate very well, but the way your vocal style fits within the instrumentation, and how you complement that sense of harmony with the heaviness.

Billy: Yup. You know it; definitely, man. It all goes back to the chemistry we were talking about. It’s the next level and phase of what you’re going to hear; this is definitely our sophomore record.

Billy: Other than “We’ll see you on tour after the new year,” thanks for being patient; here we go again!

I come from a family who is passionate about all things music. I learned to sing at an early age, and by 13, had my very own Fender Strat guitar. I tried my hardest at learning all that I could. Because I was born with cerebral palsy, I had to teach myself an adaptive playing style. I learned to write and record my own music, despite these difficulties. In college, I started making great use of my writing abilities by reviewing music, as well as copy editing. I guess it's best to stick with what you know, while welcoming a fair challenge at the same time.
Previous Gallery: Westward Festival 2018 with Blood Orange, Empress Of at The Orpheum, Vancouver, BC 09/14/2018
Next Gallery: Woofstock- Emmylou Harris and Friends at Ascend Amphitheater, Nashville, TN, 9.16.18