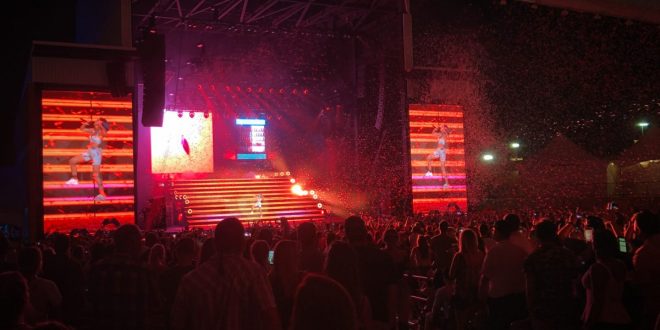 Though it was the hottest date thus far this summer, an impressive and animated crowd showed up for this Friday night charm. Halsey‘s hopeless fountain kingdom tour made it’s stop in Rogers, AR an unforgettable one, following the success over her sophomore album release. Opener Jessie Reyez proved to be a feisty and spunky artist to keep your eyes on. She has turned her experiences into a dark and intense ballad highlighting the #metoo movement, transforming her pain into strength for the world to hear. The artist on the rise presented immense passion in R&B tracks “Shutter Island” and “Body Count.” Her set closed with the Amp shining bright as Reyez plucked away on her acoustic guitar to “Figures.”

Halsey silhouetted beneath the overview curtain as “Eyes Closed” eased in; the golden hour striking at just the perfect moment. Smoke rolled down the towering stairs as a doll-esque outfit in white lace and a veil was revealed. The setting created a dream-like effect, mesmerizing listeners as Halsey poured her heart out under the deep red lights. Fans went wild for hit “Gasoline” as the chimes set in, making their voices known to the New Jersey artist.

“Arkansas, I know you were waiting in the hot sun,” stated Halsey. She proceeded to thank the crowd for their dedication and worked up the anticipation for “Castle.” The electropop singer had the audience jumping along on the chorus beat, laughing and stating “that was pretty fucking good” as the heavy synth/keys came to a hum. The crowd maintained their energy as fans clapped along to illuminate the stairs. Halsey showed extra umph and sass as she energetically paced the stage for “Heaven in Hiding.”

Halsey continues to voice her activism of subjects most important to her, asking the near sold-out Amp crowd who is a part of or supports the LGBT community. For being in the ‘Bible Belt,” it was rather shocking to see just how many supporters there actually were in the community. Love and acceptance filled the atmosphere, and it was a moment that verified society is not as divided as it is sometimes portrayed in the media. She playfully danced with the crowd and her stage dancer, TeeTee, for the performance of “Strangers.” The couple glided from left to right and back again, joining mid-stage to end the song standing in unison.

One thing that stood out during Halsey’s performance was the simplicity yet elegance of the stage. Sure, different images and artworks flashed periodically on the major screen and the facing of the stairs, but it purely left emphasis on the raw vocal talent. The rasp in Halsey’s voice was strong for “Control,” funny enough, showing marvelous control over of voice that mesmerized the crowd in pair with haunting chimes for the doomful yet powerful track. The spine tapping drums at the end were a nice touch to the song.

Intermissions highlighting her band took place during the various outfit changes, a personal favorite being dressed in a netted hoodie for “Lie.” Lurking in the shadows, she kneeled in front of the stage crying out in a powerful manner before a unique and cinematic water stomping experience. Halsey continued to show her playful side during crowd favorite “Don’t Play,” kicking water and getting intimate with fans.  She laughed off, “I knew it was going to be hot today, but this is some next level shit.” Keeping her promise via a Tweet earlier in the day, she confided about not wearing makeup, and even peeled off fake eyelashes half-way through the set. She bantered about her past addiction with make up and how she feels so much herself on stage. She consistently thanked the crowd for their respecting and warm approval throughout the night.

The Amp on this night was one of the loudest crowds to date, and it was evident to the singer felt the same. She grinned from ear to ear during her two-hour set, constantly laughing mid sentence during multiple tracks. Between emotional numbers such as “Sorry” and “Colors,” Halsey came alive for hits “Alone” and “New Americana.” She stomped to the beats for each before ending the night under the same intimate red lighting that started the show. With an arched back and arm out, she embraced the Amp’s intensity one last time during confetti blasts while she  confessed she’s “Bad At Love.” Despite the roller coaster of emotions from this summer night, there’s one thing that will remain true: Arkansas’ burning love for you, Halsey.