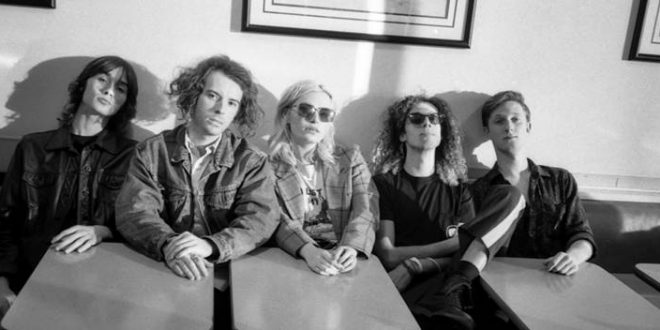 “They can easily be compared to Blondie, No Doubt and The Kills.” That’s what The Stranger wrote about LA-based quintet The Pink Slips, who’ve drawn equally high praise from the likes of Nylon, Paper and Team Rock. Today the band releases “Trigger,” the title track and video off their debut EP (Obey Records), which was produced by Isaac Carpenter (AWOLNATION) and is set for a May 25th release.

The song can be heard HERE and purchased HERE.

Led by vocalist Grave, aka Grace McKagan, The Pink Slips (rounded out by keyboardist Trent Peltz, drummer Keenan Bevans, guitarist Desi Scaglione and bassist Charlie Anastasis) cut their teeth in legendary Hollywood venues like The Troubadour and the Viper Room well before they could legally drink at the bar. They’re raising the bar in 2018 with performances at the Download Festival and Bumbershoot, a show in Glasgow with L7 and a gaggle of international dates opening for Guns N’ Roses

Their sound has been lauded for invoking the pinup appeal of ‘50s American rock, the sleek shimmer of ‘60s French pop, the unrelenting energy of ‘70s punk, and the dark romanticism of ‘80s new wave.

They’ve created something uniquely modern, shining a timeless creative light through a prism of youthful immediacy and potency.

Nylon praised McKagan for “fronting the band with ferocity and the confidence of an old pro” and UK’s Team Rock called her “a genuine star in the making.”

“There’s a saying that you should make music you want to hear,” says McKagan. “So we’ve been writing with that in mind. The songs on this EP are songs we want to hear. Hopefully, you’ll want to hear them, too.”

The Pink Slips are armed with all of the glamour and weapons of the past, ready to smash through the disillusionment of the future, while ensuring it’s a revolution we can dance to.

Previous 10 Questions: Mating Ritual
Next Combichrist Kicks Off “Everybody Still Hates You” Tour Next Friday, May 18