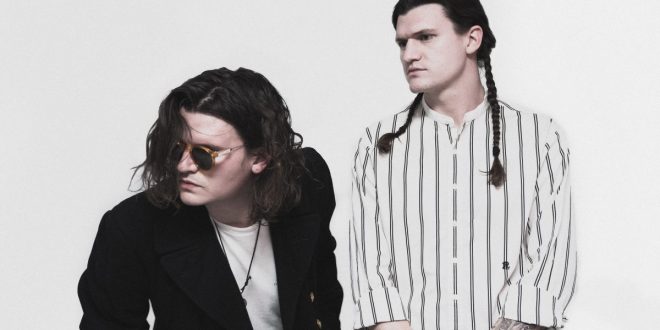 Official Bio: Mating Ritual is an independent pop duo based in Los Angeles, California. Previously known as Pacific Air, Ryan Marshall Lawhon founded Mating Ritual in 2014 when his brother Taylor decided to go back to school. Though initially a solo project, Mating Ritual became increasingly more collaborative leading up to his debut album, 2017’s How You Gonna Stop It?, released on Ryan’s own label, Smooth Jaws. Working heavily with other LA songwriters and artists, including ascending pop singer Lizzy Land, the brothers realized they missed creating music as a duo and immediately began work on Mating Ritual’s forthcoming sophomore album, Light Myself On Fire.

2. How did you complete your second album so fast after the first one?

“The first album didn’t take a long time for lack of writing, we had close to a hundred songs prepped. It was more a case of doing things right on the business side. Both my previous bands quickly signed to major labels and I had two subpar experiences so I chose to wait with Mating Ritual, find the right team and set the band up for the long term. Now that that team is in place, writing music is what comes naturally. We plan on releasing 5 albums in 5 years, Light Myself On Fire being the second.”

“It’s hard to say, as LA is always so kind to us, but Music Hall Of Williamsburg in Brooklyn felt different than anything we’ve done before. Maybe it’s the fact that we’d never been there, but the audience was so receptive.”

4. How do you go about establishing a different identity for Mating Ritual than that of Pacific Air?

“Initially Mating Ritual was a solo project, so differentiating between the two was easier, but since Taylor has been back, I think it’s been long enough and the music is pretty far from what we were doing in Pacific Air, it hasn’t really been something I’ve thought about.”

5. What should people expect from your live performance when coming to see Mating Ritual?

“A lot of energy, moreso than on recordings. We strive to make every performance memorable for both us and the crowd, so we try to mix it up and interact with the crowds differently every night.”

6. Which one of you did most of the writing for the new album, or was it more of a collaborative effort??

“There are a couple tunes that are all me, but for the most part, this is a 50/50 album. We don’t usually plan on this, and of course there are exceptions, but it usually shakes out that Taylor handles most of the electronics, synths and programming, and I do most of the live instruments.”

“We’ll be hitting the road much more extensively this fall, we have some fun collaborations in the works, and we’ve been focusing a bit more on the visual element of our music. We recently shot a crazy VR video, and while we don’t have a hard release date due to intense editing times, we can’t wait for people to be fully immersed in our world.”

“New Order. Its been a staple in my life since before I could even recognize what music was. They’re one of my mom’s favorite bands, so I was immersed in them, along with Enya, Enigma, Deep Forest, but more than the others, New Order has stood the test of time to me.”