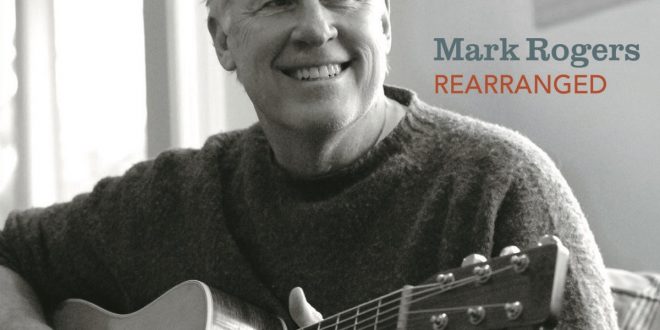 In the early 1980’s, the movie “The Coal Miner’s Daughter,” was released which was a box office hit about Country Music Legend Loretta Lynn and her life.  More importantly, the soundtrack is what many people remember due to the timeless gems that flowed from song to song.  Timeless music seems to stick with people and the more beautiful, memorable, lyrically impressive, and simple, the easier it is to remember and that’s just why it is important to note the exquisite diamond of an EP from Mark Rogers entitled, ‘ Rearranged.’

Rogers, a native of the United States Capital, Washington D.C., has a very lasting first impression of being a true expert on guitar.  His stroke and touch are somewhat similar to a single boat drifting off to sea with a slight wind carrying it along.  And he did not spare any guitar detail on this masterpiece:  That definitely arranged ‘Rearranged.’ The EPK consists of 6 beautiful songs, that all showcase a different musical side of Rogers.  In true comparison, Rogers has a very Bruce Springsteen meets Kenny Rogers sound.  Country music is definitely a true instinctive musical genre that is displayed though out the project, however, it is the cross between captivation and exposure that leaves the listener longing for more. From first listen, one needs to sit back, close their eyes, and let their imagination take them away as they enter into a peaceful trance.

The first two songs from the EP, “Right Here and Slow Parade,” are very vintage songs in composition as they have a Fleetwood Mac representation from the acoustic guitar and are very steady and demanding.  Rogers’ vocals are very smooth with a pushing force such as Michael McDonald and Springsteen with a full variation all at the same time.  ‘Right Here,’ is a song compelling in nature as it talks about that man laying it all out on the line for that woman…And also making sure that people stay focused on hearing their own true voice instead of outside chatter…”It’s what you’re doing Right Here…I’m assuming things are going to be alright,”—Lyrics from Right Here…’Slow Parade’ has a longer intro with long wails from the guitar that howl in the wind…Rogers’ ability on guitar is very noticed as he has several different passes of rhythmic guitar flowing all through ‘Slow Parade.’ With compelling lyrics, this song will grant the greatest moment for a couple to slowly hold each other and dance the night away.

“I Can’t Say Why, Waiting, and Takes Me Back Again,” are three different songs in composition. ‘I Can’t Say Why’ speaks from Rogers’ about his heart or the heart about the subject being frozen; it also describes why so many things happen in life and within others’ lives.  This is a song about life in actuality and that is something that three minutes and fourteen seconds will not be able, to sum up, but Rogers does a great job doing so. ‘Waiting,’ has a very John Lennon feel from the beautiful melody. One can hear a definite passion for Beatles Music in this song that crosses Country and Folk in one.  A love song about chances, passion, and waiting for the perfect moment that every love relationship seems to pass through:  ‘Waiting,’ has this and more!  What a beautiful song?! ‘Takes Me Back Again,’ is an instant lover’s rock!  While driving along the country roads of Tuscany, Italy, this is the perfect place to start when listening to this Bossa Nova sounding gem!  This beautiful Jazz guitar feeling song speaks boldly about how that one girl takes him back AGAIN and if she is smart, the guitar alone will make her do just that!

Lastly, the EP closes out with ‘The Blue of December,’ that has the ghostly feeling Hammond Organ coasting along the drifting melody which instantly makes the hairs on the back of anyone’s neck stand up!  Anytime a musician has the nerves to place a solid Hammond Organ against a melody of Acoustic Guitar and Piano, they are truly trying to speak to the hearts of those fanatic music lovers that will pay top dollar just to hear them perform live!  A beautiful love song in itself, ‘The Blue of December,’ is my personal favorite as the melody has a swaying, double vocal harmony: Surprisingly no drums, but it doesn’t need them at all as the Blue of any December is a day that most remember…What a way to close this EP out with a SOLID Hit!?

Mark Rogers has a definite soul-filled heart…Love is throughout his music, while painfully written in a way that forces one to sit still and love the one that compels love from them. There aren’t enough words to describe the sound that entered my ears, but stuck to my heart; however, I can guarantee that a live show from Rogers will result in a baby boom across the venue!  His words, melodies, and ability on guitar, ALONE, are all lethal weapons that shouldn’t be taken lightly!  I highly recommend Mark Rogers’ EP, especially for the couple that wants to stay in love with each other and rearrange their lives to fit into one solid puzzle!

Stephen Vicino is the founder of MusicExistence.com. He created this site to give talented musicians a voice and a way to be discovered.
@@svicino
Previous Jimmy Vorn – My Own Way
Next Album Review: Royal Coda