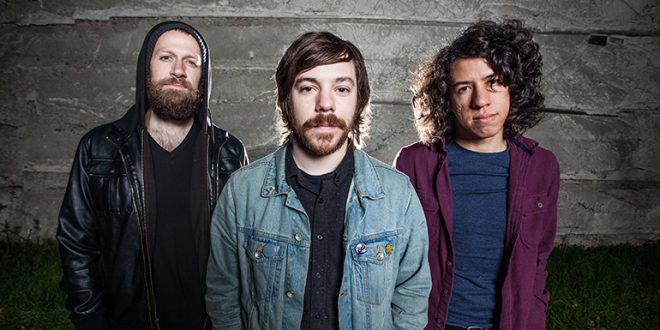 What happens when three former members of some of the most distinct rock bands get together? If Royal Coda is any indication, the answer is any hardcore fan’s dream. Formed in Sacramento, Royal Coda touts Kurt Travis (Dance Gavin Dance, A Lot Like Birds), Sergio Medina (Stolas, Sianvar, Eidola), and Joseph Arrington (A Lot Like Birds, Sianvar) in the trio’s new creative foray. The three seasoned musicians have each brought a distinct sound to their self-titled debut album, and the result is a provoking, experimental post-hardcore record.

Royal Coda only features ten tracks, yet brings a surprisingly compelling twist on a genre all too often steeped in cliché. Drummer Joseph Arrington imbues the album with ever-creative, galloping beats throughout, refusing to follow convention. Guitarist Sergio Medina is relentless in his wailing guitar riffs, especially highlighted in “Cut Me Under”. Perhaps the most intriguing aspect of the album is Kurt Travis’s voice; his technical skill is impressive, fitting in well with the traditional styles of hardcore bands. Yet the nuanced intensity and slightly higher pitch he brings to the songs deviate just enough from the norm to be interesting without being out of place.

“Calm and Composed” exemplifies Royal Coda as a band and an album, bringing conventional hardcore technical skill with impassioned lyrics and unexpected compositional choices; added synth and vocal harmonies add impressive expanse and depth to the song. In “Anything to Save”, Travis’s voice truly shines, climbing to impressive intensities to match the lyrical desperation. “Love Again” brings some welcome gentleness to the fierce tracklist, with Travis easing back on the gravely vocals as the lyrics plead and beckon.

Royal Coda, in its eagerness to be different, suffers slightly under the weight of its ambition. The two instrumentals on the album, “De Rein” and “Suffolk” seem to lack direction, and feel more experimental for the sake of experimentation, rather than a fully realized choice. However, in a music scene that values commercial success over creative risk, their additions on the album are admirable and should be inspirations for other artists. With Royal Coda’s experienced line-up, it is inevitable that their continued experimentation with ultimately result in something truly groundbreaking.

Royal Coda is, above all else, an impressive creative display from a band that could have easily phone it in. With such stellar credentials, the trio could have churned out a typical alt/post-hardcore album without anyone batting a lash. Instead, the ambitious band took the time to experiment with new techniques, aligning themselves with originality over complete safety. And that choice paid off. Royal Coda is captivating and technically sound, and leaves no doubt that this band has an impressive future ahead.

I write about music and live shows and other fun things. Strong feelings about pugs, Halloween, and burritos. Currently zooming around northern California, with frequent stops in LA.
@missdanajacobs
Previous Mark Rogers Presents New EP ‘Rearranged’
Next Gallery: Cradle Of Filth Live At The Belasco Theater In Los Angeles, CA 04/19/18