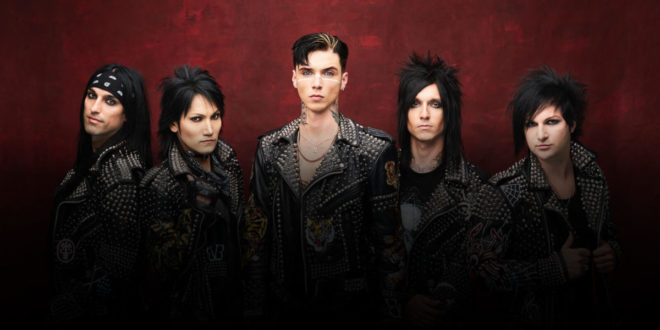 Black Veil Brides shared the music video for their latest single“When They Call My Name.” It’s available on the band’s fifth full-length album VALE (Lava/Republic Records), which smashed the charts upon release this winter. Check VALE out Here!

The video which was filmed at the sold out O2 Brixton Academy in London and directed by Dan  Sturgess, shows the band doing what they do best: incinerating a massive stage in front of a sold out screaming audience. The boys deliver a powerhouse performance beset on all sides by ten-foot flames and backed by giant video screens. Soundtracked by muscular guitars, arena-size drums, and an unshakable chant, it’s Black Veil Bridesin all their glory. It’s no surprise the song has already become a fan favorite from the record with over 1.5 million Spotify streams and counting this far.

In addition, this April they will continue the highly successful North American co-headline tour with Asking Alexandria and make their return to the Warped Tour stage for the legendary jaunt’s final run. Check out the itinerary below.

VALE remains one of the biggest rock albums of 2018. Not only did it capture the #1 on the Billboard Top Rock Albums Chart, but it also reached #3 on the Top Albums Chart and achieved the highest album debut in the band’s history. Additionally, it debuted in the Top of the Overall Top Albums Chart in nearly 25 countries. While some have suffered in the ever changing music climate, Black Veil Brides have continue to dominate, getting bigger with each subsequent release and asserting themselves as powerful voice in modern rock music.

Previous AFI and Rise Against to Join Forces For “Mourning in Amerika” US Tour
Next Rod Clemmons revisits his musical roots in “What’s Up? It’s Me” video