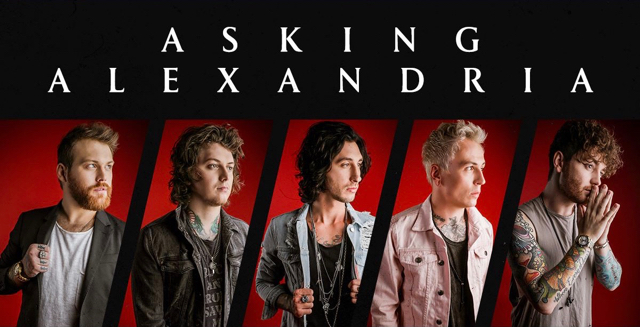 After recent changes in vocalists, and over 10 years making music, no one was sure what the latest effort from Asking Alexandria would be like. Starting with their metalcore roots with Stand Up And Scream, evolving more into a metal sound with From Death To Destiny, then reverting back to the metalcore style with the change of vocalist to Denis Stoff with The Black. Once it was announced that Stoff had left, and original vocalist Danny Worsnop was returning, it was gonna be interesting what step this self-titled album would take. Would it continue with the metalcore style from The Black, or would it continue the evolved style from From Death To Destiny?

First thing to note is that the lyrics are more mature than what came before. Most of the themes of this are around Worsnop’s return to the band, and that time when he was away for the band, with lyrics like “I wouldn’t take back a moment, not one miserable moment” from “Into The Fire”. Each lyric has punch to it, ringing a lot of truth with each word sung, and conveying every emotion from every band member after everything they’ve been through. Songs like “Alone in a Room,” “Rise Up,” “Vultures,” “Room 138,” and “Where Did It Go” convey this exact emotion, especially with the latter two, with the lyric “I never expected to be here again” from “Room 138”, and the advertised lyrics from “Where Did It Go” listing the history of the band’s albums: “There was the first one, the triple gold one, the stole by every fucking band on summer tours one. Then the second one, the living reckless one, the knock the popstars off the charts one. Then the third one, the fuck the world one, the arenas singing every fucking world one. Then the fourth one, the wasn’t me one, the we needed just a little space to breathe one”.

Secondly, the musicianship is still evidently fantastic – the style may have changed, but the technicality hasn’t changed. The electronic sounds have made a prominent return from Stand Up And Scream, but it has a mature sound to it, matching that evolved sound from From Death To Destiny, giving it a powerful sound, vibrant and different, and very unique, differentiating it from not only the rest of the bands out there, but even their own albums. Each member gives it their all in their own way; the drum parts from James Cassells give a vibrant beat that drives each song forward and technically interesting, the bass line from Sam Bettley gives a great feel to the song, and would get listeners moving, like in the tracks “Hopelessly Hopeful,” and “Room 138”, and the guitarists Cameron Liddell and Ben Bruce work well off each other, especially in the breakdowns in “Eve,” making the music easily unforgettable, and always enjoyable to listen to again and again.

Finally, the vocals from Worsnop are much more fierce and powerful, showing how much he himself as a musician has evolved. Each evoking the passion and conviction needed for the lyrics. Songs like “Into The Fire,” “Where Did It Go,” “Eve,” “I Am One,” “Room 138,” and “Vultures”, especially the latter, showing the raw and honest side of the band, especially in the harmonies.

There are, however, some criticisms. Firstly, whilst it’s interesting to try something new in terms of sound, the song “When the Lights Come On” sounds as if it was written for Fall Out Boy in mind, more so with the instrumentation. Secondly, “Empire” is probably the weakest out of the tracklist, with the rapping seeming disconnected with what the rest of the song was doing, as the enjoyable parts were those moments outside of those rapped sections. A little disappointing from what could consider to be, outside of those tracks, a very solid album.

Overall, this is a great album for the band, especially as an album for Worsnop’s come back, and the best direction for the band to go for their next evolution. The production from From First To Last’s Matt Good is very well done showcasing each musical track at equal level, and it’s a great way to show the band’s new sound. Each song shows a mature angle from the band, and it’s all enjoyable to listen to. True, there are some choices that are unusual, but most are done in a way that are easily forgivable, and don’t distract from the rest of the album. Even if you weren’t a fan of the band, or even more into their early metalcore sound, there’s still a lot to enjoy from this album that many will want to listen to over and over again.