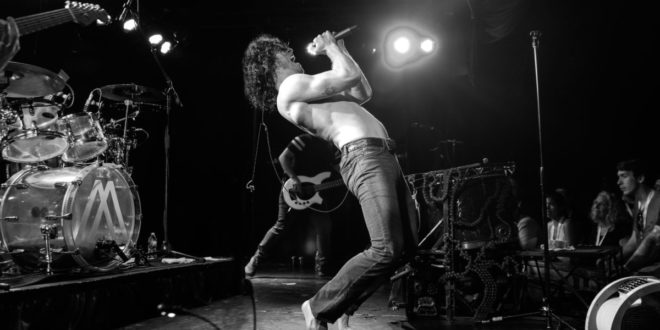 Nothing More Extends US Headline Tour

Visionary Texas rock quartet NOTHING MORE breaks wide this week following the September 15th release of the highly anticipated LP The Stories We Tell Ourselves debuting at #5 Billboard Top Albums Chart this week.

The band’s second album release via major independent label Eleven Seven Label Group/Better Noise Records, The Stories We Tell Ourselves sees Nothing More’s narrative set as an emerging act on the ascent breathing new life into the genre and driving the resurgence of rock in North America and abroad.

In addition to the #5 Billboard Album Debut, The Stories We Tell Ourselves saw stateside Billboard debuts at: #2 Independent Album, #3 Rock Album, #3 Alternative Album, and #15 on the Top-200 Chart. This follows #3 iTunes release day debuts on the Overall Album and Rock Chart. First week sales more than doubled from the band’s 2014 self-titled LP, and this week lead album single “Go To War” is currently Top-5 at Active Rock at #4.

Yesterday Nothing More announces a multiple-date 2018 extension to their current U.S. headline tour, which sees the band – frontman Jonny Hawkins, guitarist Mark Vollelunga, bassist Daniel Oliver, and drummer Ben Anderson – heading to Europe in between headlining venues from coast to coast. The new 2018 dates go on pre-sale today at noon EST. A full list of tour dates can be found below and on the band’s website.

Nothing More’s live show is a sight to behold; it features a 400 lb., 14-foot-tall instrument made from scrap metal, automotive and motorcycle parts. The instrument was hand-crafted by Nothing More bassist Daniel Oliver, a self-taught welder and metal artist. It looks and sounds like nothing you’ve come across and must be seen to be believed.

“This album and artist raise the bar for new artists in rock genre,” says Eleven Seven Music CEO Allen Kovac who signed Nothing More to Better Noise Records in 2013. Iconic rock artist Nikki Sixx concurs, “When I first debuted Nothing More on my radio show Sixx Sense in 2014, I knew they were a band who would lead the charge for a new generation of rock acts”