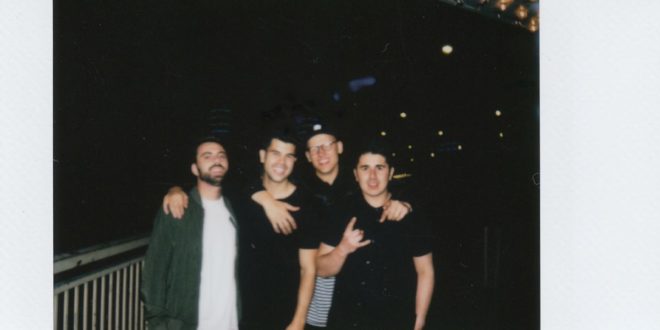 Exclusive: LEO Premieres “On My Mind”

Adelaide synth-pop group LEO shared an exclusive premiere of new track “On My Mind” today with Music Existence, ahead of its official August 23rd release. The dreamy single has the band staying true to form, with an ethereal arrangement sure to delight fans and newcomers alike.

Check out the song here:

Formed in 2015, the Australian quartet has had a less-than-conventional ride. Lead vocalist Tom Montesi and drummer Ilia Martini joined with guitarist Jae Curtis, entering a competition to support The Veronicas at their Adelaide Entertainment Centre show. Having previously not played a single show together, the long shot paid off, with The Veronicas choosing LEO’s entry “A Beautiful Mess”, allowing the band to debut in front of a sizable crowd. LEO was completed later that year with the addition of Matt Schirripa on synth and acting as visual designer, solidifying both their signature sound and look.

Following up soaring  “Veins” and achingly beautiful “New Recording 135” (recorded in Montesi’s living room and named after its corresponding voice memo on his phone), “On My Mind” is everything LEO does best. Expansive and atmospheric, the song swells into a waterfall of trilling synth, Montesi’s distinct croon simultaneously delicate and powerful. The track seamlessly layers in crisp guitar riffs behind the imploring vocals, complementing Montesi’s flawless falsetto. The atmospheric vibes gradually build throughout the arrangement, slowly engulfing the melody in a gauzy haze. The bridge culminates with an ethereal suspension of the melody, the musical equivalent of floating through a starlit night. “On My Mind” is a triumph of angelic sound; a testament to the unique aesthetic LEO has so painstakingly cultivated.