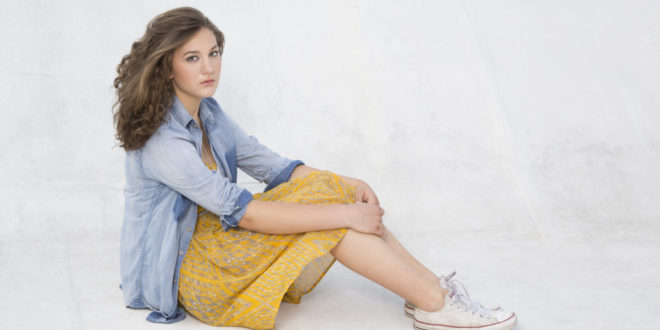 With YouTube music videos amassing over 100 million views and a glossy new single under her belt, sixteen year old Whitney Woerz is anything but typical. The bubbly young star moved with her family from Connecticut to New York in hopes of pursuing a career in music, and has been met with continued success. Currently attending LaGuardia High School of Music & Performing Arts, the well-known inspiration for Fame!, Woerz has gained recognition for a catalog of powerful, emotionally honest songs.

At only fourteen Woerz made her professional debut in 2015 with “The Fame Sessions”, an album of well-produced covers. Tackling popular tracks like One Direction’s “Infinity” and Bon Iver’s “Skinny Love”, Woerz showcased a versatile voice with depth beyond her years. “Behind the Smile” came next, an EP of original songs, all written by Woerz and inspired by deeply personal experience. Unsatisfied with simply juggling high school and a music career, Woerz has made it her mission to tackle the stigma around mental illness. Following the release of her new single “Idea of Her”, Woerz recently had a chat with Music Existence to talk high school, inspiration, and new music.

Check out the music video for “Idea of Her” here:

Music Existence: You entered the music industry at a very young age. When did you realize that music was what you wanted to pursue?

Whitney Woerz: I’ve been singing before I was talking, which is what my mom says. I started off doing musical theater when I was in elementary school and once I did my first show…I think I was six or seven, I was like ‘I wanna do music.’ I wrote my first song when I was ten and then I really professionally got into it at age twelve, when I just started writing all the time. It just kinda went from there. I’m really excited that it did!

ME: You attend LaGuardia Arts High School. What’s it like to attend such a well-known institution? How do you think it’s influenced your growth as an artist?

WW: LaGuardia is great! Going to school is fun for me. I’m a drama major there, so aside from singing I also like to do acting. It has totally helped me grow, not only in my acting but also my acting through singing, like telling the story through my songs. I’ve just made so many great friends and I have so many great mentors as teachers now. I’m so lucky to go to such a great school.

ME: Your EP “Iridescent” drops this summer. What’s the process been like and how was it different from producing “Behind the Smile”?

WW: It’s been different but also the same from producing “Behind the Smile”. When I wrote my first EP I was twelve and thirteen, and I feel like I’ve matured as a vocalist and also a writer since then. So it shows in “Iridescent”, my growth. This process was more…we did a lot of guessing and checking. We tried so many different things for each song, just to get that perfect root that aligned with my eyes and my producer’s eyes. It was a great process and I’ve totally grown from both, but mostly this one.

ME: Why are you most excited to share “Iridescent” with fans?

WW: I think that “Iridescent” has a newer Whitney sound! I feel like it holds new elements of my voice, and definitely newer, more up-tempo, catchier hooks. I’m really excited because it’s different, and I feel like my fans are really gonna like that. I’m so excited to share it with everybody.

ME: What would you say are your biggest inspirations when writing songs?

WW: My inspirations all come from experiences that happen to me or a feeling or a person or even just looking out my window at night at the lights in the city, that’s super inspiring. I always like to write from things I can relate to and something that actually has a story.

ME: Which artists do you most admire?

ME: Can you talk a little bit about your work with Bring Change to Mind?

WW: I’m a teen ambassador for Bring Change to Mind, which is an organization run by Glenn Close to help end the stigma around mental illness, so I’ve worked a lot with them to help them do that. Like “Ghost Story”, the music video, they were really attached to promoting that. We focused on six kids and their stories with mental illness and what they’ve been through. Bring Change to Mind helped put that out there. It’s a really inspiring video and through that, I feel like I’ve made a difference.

ME: Between your work as an ambassador for Bring Change to Mind and songs like “Ghost Story” you’ve shown a commitment to ending the stigma surrounding mental illness. What inspired you to focus on such an intense issue?

WW: At a very young age, I think I was twelve, a friend that I knew only from social media told me and a few other girls that she was cutting herself and that she wanted to kill herself. At the time, I really didn’t even know what those two things meant, so I actually called up Bring Change to Mind and they said to call Suicide Hotline, so I did and help was on the way. In that time period, this was the first time I really sat down with a notebook and a pen, because I didn’t know how else to contact her because I couldn’t physically hold her or talk to her over the phone. So I sat down and I just wrote her “Ghost Story” and I recorded a really rough video and sent it to her. After help had arrived she told me that it helped her so much and that she was so thankful that somebody listened. Once I helped her I started to write for anybody and I felt like I could help so many other people.

ME: Anxiety and depression can feel very isolating, especially for teenagers. What’s your advice for teens currently struggling with mental health?

WW: I would say that it is okay. Some people think that it’s not okay, and it is. And I always say it’s always good to talk about it, because nobody ever talks about these things, which is why sometimes people don’t get help. The first step is talking about it, maybe with an adult or just any loved one. It could even be a friend. And that will segue into getting the help that is needed. So, just know that it’s okay and to talk about it.

ME: We hear all the time that self-care is important, especially for mental health. What are some ways you like to treat yourself when you’re feeling stressed?

ME: Your music videos have millions of views on YouTube. How does it feel to receive such a positive response and see so many people connecting with your art?

WW: This is more than what I ever really thought my videos would do, I didn’t think they’d even hit a million views. But now that it’s over that mark, it’s just-it’s mindblowing, I really don’t even have the words for it. I’m just so happy that people have heard my stuff. That was my goal, for as many people as possible to hear and be inspired by what I have to say through my lyrics. To see millions of people be inspired by my lyrics, I’ve even had people thanking me-through the music video for “Ghost Story”, I’ve had people tell me it saved their lives-through that, it just overjoys me. I don’t even have the words to describe it. It’s amazing.

ME: The music video for “Idea of Her” depicts the struggle to project an outward appearance of perfection and the inner turmoil that results. Is that something you struggle with? What inspired the video?

WW: I feel like everybody finds themselves in a situation where they have to really stifle their personality, or heighten their looks in order to fit in or be accepted in this society, especially through social media. This video was the director’s concept, but I feel like I relate to it and a lot of people relate to it. There’s always that inner self and that inner person inside of you that wants to get out and actually show your true self, whether it’s actually a good thing or a bad thing. I mean, some of the lyrics lean towards that people cover up the bad sides of them[selves]. So, in all, it’s basically a music video saying it’s okay to let that inner self shine.

ME: As a teenager and a performer, you face both the pressures of the music industry and growing up at the same time. How do you find ways to have normal experiences in the midst of a pretty unconventional career?

ME: You’ve been able to work with and meet some pretty big names already. What has been the coolest experience so far?

WW: Let’s see…the coolest experience I’ve had so far is actually shooting the music video for “Idea of Her”. I worked with the best team and the best director, Miles [Szanto]. And we all got along so well. I was also on The Today Show last year! I was the [Elvis Duran] artist of the month, and that was pretty awesome. I got to sing one of my songs “Six Second Love” and do an interview with Kathie Lee and Hoda. Also, walking the red carpet is really, really fun. I got to see all these people I look up to. And I’m excited for what else is to come!

ME: What song have you had on repeat this week?

ME: Imagine this: you’re on Broadway and one of the members of One Direction is your costar. What musical are you in and which member are you working with?

WW: My favorite musical right now is Dear Evan Hansen. I watched that off-Broadway, I saw it a few times on Broadway. It centers around mental illness, and the struggles around that, so obviously I’m drawn to that. And I think…Harry. I like his music the best-you know, they’ve all taken their solo paths-and to me Harry’s is my favorite. So I would star with Harry Styles and be in Dear Evan Hansen.

ME: If you were to randomly hear one of your songs at any place during any scenario, what song and where would it be?

WW: I like going to concerts a lot, that’s another thing I like to do in my free time. Before every concert there’s always music that plays and people always sing along. I’d love for “Idea of Her” to play before a concert, that’d be really, really cool. Definitely “Idea of Her”.

ME: If you had to pick the best live show that you’ve been to, what would it be?

WW: Definitely Twenty One Pilots. I’ve seen them…way too many times. I can see them so many times because their show is so interactive. Every song, they make it like it’s a different scene. They put so much time and effort into their live show, it really shows. It’s not just singing and performing, every single piece has you has you intrigued.

Check out “Idea of Her” here: Spotify, Apple Music, Amazon