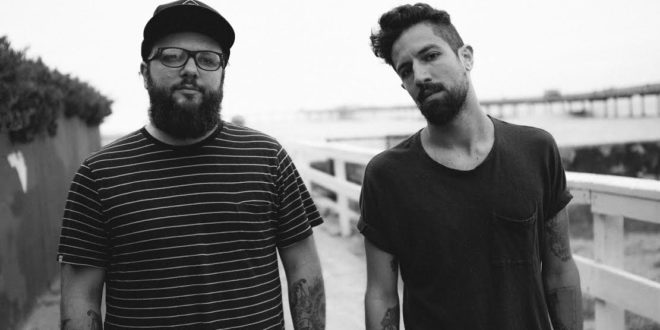 After splitting up back in 2010, New York post-hardcore band Envy on the Coast have returned with their latest EP Ritual, their first dose of new music in almost a decade. With two solid albums already under their belt, hopes are high for Envy on the Coast concerning their return and this project is a sign of good things to come.

The opening track “Manic State Park” offers a slightly theatrical approach that the band has toyed with in the past. The plucking, animated guitars and booming drums pair well with Ryan Hunter’s playful and dramatic vocal performance. The histrionic tone of the track is comparable to the likes of My Chemical Romance or the later discography of AFI. The track slowly builds, setting up its stagy essence before exploding into its climax and showcasing the high energy the band is known for. As the EP progresses into its more post-hardcore elements, one of the biggest comparisons to Envy on the Coast is At the Drive-In, especially on “Inhaler” with its the animated vocals, classic rock tinged guitar licks, and energetic choruses. It’s a passionate song that showcases the band firing on all cylinders. The following track “Lioness” features a pulsing rhythm section that represents something that Future of the Left could have produced and Hunter does a fantastic job transitioning from his higher octave singing to abrasive screams, similar to the likes of the aforementioned At the Drive In’s Cedric Bixler-Zavala.

The next couple of tracks “Virginia Girls” and “How to Make a Man/Grenade” take a more modern hard rock approach. “Virginia Girls” has a smooth, stylish sound with a bit of a southern tint in its guitar work. “How to Make a Man/Grenade” has a heavy texture that draws comparisons to the likes of Heaven’s Basement or even an act like Wolfmother, thanks to its apparent homage to the older styles of hard rock music. These heavier moments offer a nice buildup to the final track “Sift” which shows the band taking more of a prog rock approach. The soothing instrumentals paired with Hunter’s more delicate vocal performance creates a calming, almost ambient, conclusion to the EP. This level of genre hopping truly shows how varied Envy on the Coast can get with their style and leaves open a plethora of opportunities to expand on this experimentation for future projects.

Though I certainly can’t fault the project for being on the shorter side (it’s only an EP after all) I should mention that Envy on the Coast’s music works better in a longer setting. In the context of their two full length albums, the band could expand on their sound more and stretch out their progressive capabilities. While Ritual is a rich listen, I couldn’t help but want the project to take more time and elongate. However, this is a minor gripe considering that the band has returned after a seven year layoff and are taking an understandably precautionary approach.

There is little left to be desired regarding Envy on the Coast’s return. With hardly any hesitation, the band has jumped right back into the same lively approach that they showcased on their previous albums, Lucy Gray and Lowcountry. It’s a fast, hard-hitting sound that blends hard rock and post-hardcore in satisfying fashion. Envy on the Coast have picked up exactly where they left off and longtime fans should be more than happy with the result.

Cain Miller is an aspiring writer who hopes to work his way up and gain notoriety for his material. Having written about film, television, music, and sports, Cain is always looking to gain as much experience as he can and continue to improve his writing abilities.
@cainemiller
Previous VANISH Release “Paper House” ft. Spencer Charnas of Ice Nine Kills
Next Gallery: Rising Appalachia at California Roots Festival in Monterey, CA 05/27/17