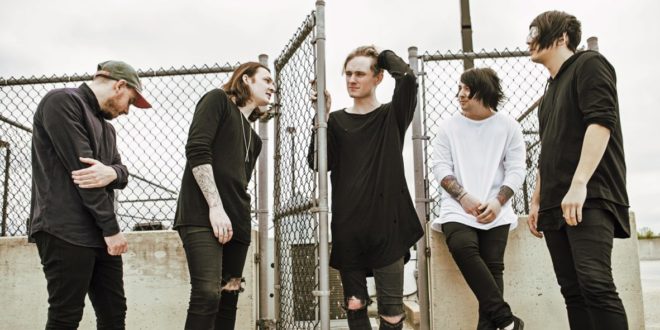 New Jersey-based post-hardcore group VANISH recently announced their debut EP, From Sheep to Wolves, which is set for release on July 21, 2017 with Outerloop Records. As an introduction of their sound to the scene, VANISH recently released the official music video for “Dead,” followed by a wickedly infectious track, “Heaven Sent // Hell Bound.” Today, after much anticipation and fans eager to hear more, Vanish is thrilled to be partnering with Alternative Press to unveil a new track off From Sheep to Wolves, titled “Paper House,” which features Spencer Charnas from Ice Nine Kills. Elaborating on the track, drummer Nick Perrone stated:

“‘Paper House’ is a track we’ve had written for quite some time now and is one of our favorite songs to play live due to its dynamic range. Spencer Charnas of Ice Nine Kills is featured in this track and did a great job conveying our message with his own twist to it. This song is about being broken, used and torn apart so many times, that you eventually fall and crumble just like a burning home would. Relationships sometimes tend to be one sided and will make anybody feel like they are helpless if they are on the wrong side of it. Being able to stand up for yourself and leave a situation you do not deserve to be in, is a step in life most people hesitate to accomplish. We want to give listeners that are going through these issues peace at mind knowing that they can be strong enough to take control of their own lives and change any bad hand they are dealt with.” – Nick Perrone

Post-hardcore New Jersey quintet VANISH draws musical influences from bands such as My Chemical Romance, Mariana’s Trench, and Sleeping With Sirens while bringing in their own unique aesthetic to the core of their sound. From heavy hitting riffs to catchy choruses and emotional lyrics VANISH draw attention not only for their energetic music but for their dramatic on-stage performances. With the release of their new single “Dead” on Outerloop Records they are surely a band to watch out for in 2017. VANISH is Patrick Hamilton (vocals), Nick Perrone (drums), Bobby Miller (guitar), Justin Beacham (guitar), and Jack Hinson (bass).

Head to  Alternative Press today to listen to “Paper House” the latest single off Vanish’s debut EP, From Sheep to Wolves. The EP is set for release on July 21, 2017 via Outerloop Records and can be pre-ordered here. Follow VANISH online for new music, announcements, shows, and more.