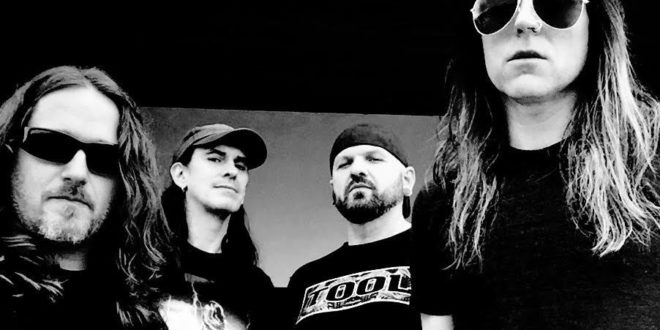 After being inactive for over a decade, alternative rock band JIBE have made their long awaited return with their latest LP Epic Tales of Human Nature. JIBE were a prominent Dallas group throughout the 90s and early 2000s and the band gained a respectable amount of notoriety during their early years. However, in 2004 vocalist Joe Grah departed from the band and JIBE remained silent until now. JIBE have returned with new music and appear determined to pick up exactly where they left off. In this interview, Joe Grah took the time to discuss the band’s return and what fans can expect from their newest output.

ME: Epic Tales of Human Nature is the band’s first LP since 2003. Can you describe what it was like returning to music after a hiatus of 14 years?

Grah: It’s been both unexpected and rewarding, as we really never anticipated this kind of response from the community as a whole. Being back together as a functioning unit is beyond describable. I’ve never felt so at home since re-joining forces with the band that gives me purpose and an overall sense of oneness, I was lost for a while but no more.

ME: Back in September, JIBE had their first live performance in 11 years when you took the stage at the popular Gas Monkey Live venue in Dallas, Texas. The show was quite successful, having completely sold out, so what was this experience like?

Grah: Our reunion concert at Gas Monkey Live was an extremely overwhelming experience for us all. We never expected so much love and acceptance. We’re beyond thankful for this opportunity to once again carry the torch.

ME: It seems fitting that you made your return in Dallas considering that’s where you mainly built up your career. Would you say that Dallas’ music scene is as strong as it was when you initially established your career back in the 90s?

Grah: I actually live in Los Angeles, but since we’ve reunited I’ve been spending a lot of time in Dallas and have been fortunate enough to see the scene rebuilding itself. It’s actually pretty crazy. Since we’ve reunited a handful of amazing Dallas bands have done so as well. The Nixons, Tripping Daisy, South FM & Tablet to name a few.

ME: For your new record, you have worked with Matt Noveskey and Toby Wright who are known for their impressive studio work. How much do you feel these noteworthy producers elevated the quality of the album?

Grah: Working with Matt Noveskey on the production of the album was beyond enriching for the band and the overall album. Matt’s been a die-hard fan of JIBE for years and really enabled us to be ourselves on this record. In addition, he genuinely helped elevate the band to a whole new level studio-wise. Toby Wright worked with us brilliantly to capture a beautifully mixed soundscape that delivers the goods sonically.

ME: What is your favorite song off of the album?

Grah: This album is beyond personal for me and I usually don’t listen to my work. However, I continue to be moved by this record daily. My favorite song changes periodically but today I’m really diggin’ “Release & Waiting.”

ME: The music video for “We’ve Only Just Begun” looks like it was quite fun to film. The story depicts vocalist Joe Grah overcoming a series of obstacles before reuniting with the rest of the band. What was the inspiration behind the narrative of the video?

Grah: The “We’ve Only Just Begun” video concept is based upon a series of endless dreams/nightmares I was inundated with while separated from the band. I could always hear them playing off in the distance but could never quite get there, always having to endure relentless obstacles, diversions, and pitfalls in my attempts to find them. It got pretty exhaustive and depressing after a while to say the least.

ME: Along with this new album, JIBE are also working on a documentary that will chronicle the band’s history. Can you give us some more details about the film? Is there an expected release date?

Grah: The documentary we’ve been working on with director Mathew J.C. tells the story of a group of guys from different backgrounds coming together to share a vision. On the way they find success and happiness only to self-destruct at the pinnacle of success. Fast-forward a decade and the boys are back more convicted than ever and ready to take back their destiny. The doc is still filming but should be wrapping soon with no confirmed release date as of yet.

ME: JIBE are widely known for their extensive touring schedule, having played over 2,500 shows. Do you plan on continuing this respectable touring output?

Grah: We began our career as totally devoted road dogs and we will be continuing this work ethic with this and all future releases.

ME: How do you compare JIBE’s current sound to what you were releasing in the 90s and early 2000s? Do you feel that you have evolved as a band?

Grah: We’ve definitely evolved but with Epic Tales of Human Nature we made sure to bridge the gap between the old and new. This record has equal tones and pays true homage to exactly where we’ve come from and where we’re going.

ME: Now that the album is complete, what is next for JIBE?

Grah: We’re in the development stages of tour planning now and will be out on the road soon in support of our new album with plans to continue well into next year.

Cain Miller is an aspiring writer who hopes to work his way up and gain notoriety for his material. Having written about film, television, music, and sports, Cain is always looking to gain as much experience as he can and continue to improve his writing abilities.
@cainemiller
Previous Gallery: Bad Omens at Audio in Glasgow, 18.06.17
Next Album Review: Inertia – The Process