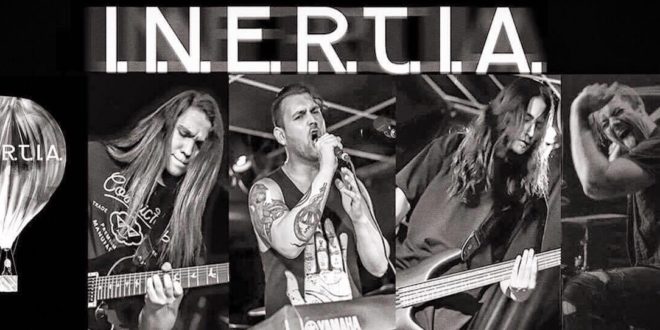 Inertia are a Southern California metal band who recently made a noteworthy statement with their debut LP The Process. For a debut album, The Process features a diverse combination of influences ranging from prog rock to metalcore and Inertia make it clear that they hold big intentions as a rising group. While their debut is slightly challenging to categorize based on its constantly shifting styles, Inertia have good intentions with this project and showcase a wealth of potential.

The album’s opener “Guilty Crown” is a notably diverse track that naturally transitions from soft to loud in slick fashion. The quiet piano openings and overlapped string section in the background provides a clean sound that works in contrast with Dillon Forst’s exuberant vocals. Forst’s singing style resembles Opeth’s Mikael Akerfeldt with a hint of Trent Reznor mixed in as well. Forst’s voice has a respectable amount of power though it remains smooth enough to not drown out the instrumentation. Interestingly, Forst is given the opportunity to let loose and contort his vocals towards the end of the track when the song reaches a more metalcore area both in terms of its growled singing and punishing guitar work. Needless to say, there is plenty going on all throughout this track and Inertia show their experimental drive right out of the gate. This trend continues on “The Run” which opens with guitars that are almost comparable to space rock and then shifts into another pleasant string section. When describing Inertia’s sound, the main band that springs to mind is the aforementioned Opeth, specifically their album Damnation which takes a quieter approach compared to the band’s records that remain closer to death metal. Similar to Opeth, Inertia possess emotional tones both in their lyrics and instrumentation which once again features a layered string section. Forst does a nice job of carrying the melody and creating a solemn aesthetic.

The Process isn’t entirely slow and progressive however. The impressively fast and chaotic percussion on the track “Asphodels” is closer to punk than metal and Forst’s vocals again remain smooth yet they let loose an occasional snarl that gives the song some nice bite. The track “Face of Defeat, Pt. 1” starts off with a fairly standard catchy hook, though it eventually develops into a forceful, gritty explosion around the 4-minute mark. The pounding percussion is in full effect here and the guitars once again almost reach metalcore territory which works in interesting fashion when paired with the prog rock escalation of the entire song. These moments show the true aspirations behind Inertia. It seems that the band wants to figuratively dip their toes into multiple metal/hard rock genres and the result is a fairly varied assortment of tracks, at least in the first half of the album.

Inertia’s debut is certainly an ambitious project though it’s high intentions also provide drawbacks. At 52 minutes, The Process starts to feel its length around the tracks “The Heartless & the Nobody” and “A Good Day to Die.” These tracks feel generic in their instrumentation due to the band’s exclusion of their previous experimental style which causes the album to feel stale at this point. For a band  to release a lengthier album for their debut, it’s important to provide enough variety throughout the tracks to keep the sound fresh. While this album starts off strong, it’s prolonged runtime definitely makes its presence. For future releases, Inertia should fully commit to the diverse, experimental output that they showcase in earlier tracks.

The Process is a respectable first outing for Inertia. It’s fairly common for bands to play it somewhat safe for their debut projects considering that they’re still crafting a distinct style, but Inertia seem fully confident in their abilities to have a strong career. The flaws of The Process mainly lie in its bloated runtime but the potential is still present based on the band’s excessively detailed song arrangements. With a forward-thinking sound and a drive to make a splash in the metal community, Inertia will likely continue with their progressive style and craft extensively diverse material in the future.

Cain Miller is an aspiring writer who hopes to work his way up and gain notoriety for his material. Having written about film, television, music, and sports, Cain is always looking to gain as much experience as he can and continue to improve his writing abilities.
@cainemiller
Previous Interview: JIBE
Next Gallery: Cage the Elephant at Boston Calling 5/28/17