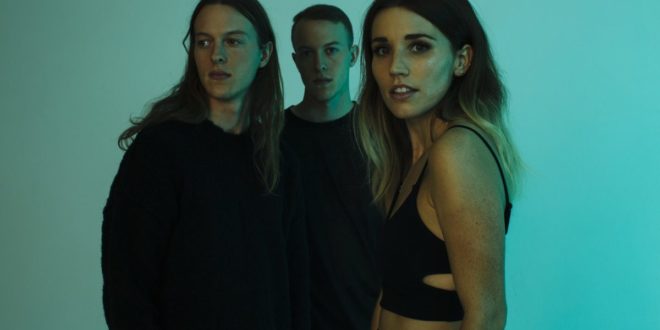 Electronic pop trio SHAED is thrilled to announce a 3-week U.S. run supporting Sir Sly this summer!  The dates come on the heels of the band wrapping-up a 6-week full U.S run with Bishop Briggs and sees SHAED returning to The Bowery Ballroom in New York City, and the first hometown show of the year at the Rock & Roll Hotel in Washington, DC.  The trio has spent the last several weeks in Los Angeles and NYC writing and recording songs for its upcoming debut full length, due out later this year onPhoto Finish Records, and will dive headfirst into the summer festival season with appearances at Firefly, Electric Forest, Mamby on the Beach, and Summerfest.

Comprised of powerhouse vocalist Chelsea Lee, and the twin brother production team ofMax and Spencer Ernst, SHAED has had its foot to the pavement since the release of its debut EP Just Wanna See in October of last year.  The band has been touring non-stop, sharing the stage with the likes of Marian Hill, VÉRITÉ, Charlie XCX and more – all while continuing to write on and off the road for its debut studio LP.  SHAED’s melody-first approach for songwriting has always been at the forefront of its DNA, allowing Lee’s vocals to settle perfectly into the Ernst twins’ dynamic and rhythmic instrumentation and production, where the space between notes is truly as important as the notes themselves.

With just six songs released, SHAED has accrued an impressive amount of glowing press – from Billboard describing Lee’s voice as having “a soulfulness and belt-ability that would stand out in any genre” to Interview Magazine saying the trio “combine bright and buoyant beats with smooth vocals, resulting in a vivid groove.” The band’s versatility and incredible live talent has led to a Spotify Singles session – where SHAED has already amassed more than 7 million streams, including a cover of The Weeknd’s “Star Boy” – and an intimate stripped-down session at Paste studios.

SHAED’s summer tour with Sir Sly begins on July 8th in Atlanta, GA following a slew of festival dates, and wraps in Fresno, CA on July 30th.  Tickets are on sale now, with dates below, and more to be announced!  Please stay tuned to shaedband.com for up-to-date information on the band’s forthcoming debut LP and tour dates!