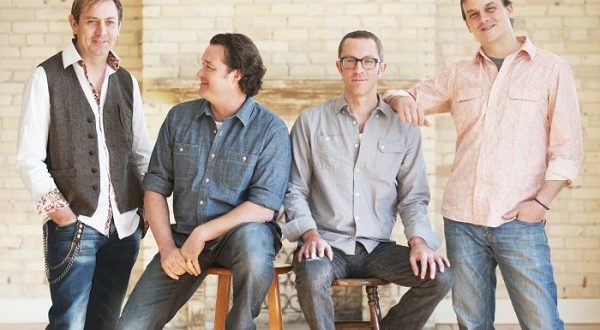 When you think of Michigan and rock, you probably think Alice Cooper, Ted Nugent, and Kid Rock, but prepare to be pleasantly surprised by Kallamazoo quartet Willamena who, despite their long and very successful radio history, are virtually and tragically unknown. Equal parts 90s college rock and modern Indie, this foursome’s sixth studio release, Strong Enough to Last, brings a fresh, uplifting tone at exactly the right moment.  And if track #4 (“When You Close Your Eyes”) sounds familiar, it’s because it’s already been dominating alternative, adult alternative, indie rock radio charts AND Billboard for several weeks now!

“The EP had to be titled Strong Enough to Last if only because some producer took eight-plus months to never deliver the first one. He held our masters hostage to try and leverage more rights for himself. Bad move. We don’t roll over for scammers, and we never give up. So we saved our nickels and went out and recorded the whole thing all over again — better. Eventually he’ll hear it on the radio, and maybe drive right into the ditch? We wouldn’t want anybody hurt of course; but we’d pay money to acquire one of his set-off airbags.” – Willamena

“The EP title also reflects our history. We’ve been called ‘indie underdogs’ and ‘indie heroes’ and any number of ‘Rocky’ references over the years, and while I don’t know about ‘heroes,’ some of that’s factual. Basically every label A&R rep turned us down; most of them repeatedly. But we keep slugging along, and they keep getting fired. Now we’re earning more radio airplay than no small number of big-money acts can buy. From the single: ‘close your eyes and dream,’ right? And like we put in all our liner notes: ‘long live indie!'” – Chad Hendrickson

Willamena has also released a fun and lighthearted, DIY video for their radio and Billboard charting, hit single “When You Close Your Eyes.”

“The lyric video for the single’s as ‘indie’ as it gets. Total budget: $0. So, sorry, VH-1. We’re not getting on. We spent the money on Grammy winners for mixing & mastering instead. Maybe it looks exactly like a $0 clip, but DJs in exotic places like Greece and Australia (and South Carolina) love how it sounds.” – Willamena

Track List:
1. Strong Enough to Last
2. Open up the Stars
3. As Long as I Can
4. When You Close Your Eyes
5. Darkest Before the Dawn

Click HERE to Stream Strong Enough To Last on Spotify!