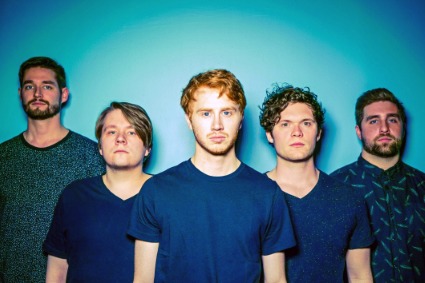 A follow up to 2015’s EP A Glitch in the Void, Ohio band Playing to Vapors is back on June 16th with their LP Shred the Master Design. Though the album isn’t perfect, the group puts their best foot forward to satisfy old fans and attract new ones at the same time.

“The Perfect Weapon in Human Form” has a bit of a jangle to it and is downright catchy and infectious. It grabs listeners from note one and never lets go making the tune dynamic and wholly interesting to listen to as one never is quite sure what the band has up their sleeves next to impress anyone who is hearing the track. The lead singer’s vocals are tight and strong here, towing the line between hard rock and a more casual rock sound which separates Playing to Vapors from other bands in the same genre of music. The melody is compelling, but the standout feature of the track are the lyrics which feature some fantastic wordplay such as “she is me and we believe there’s nothing we can’t do.” It brings to mind just a tiny slice of what The Beatles did on “I am the Walrus,” but in a slightly less jarring way. The loud instrumentation sometimes drowns out the vocals but all in all it is one of the best moments on the album.

Feeling very 90s, grungy “Desert Lights” is full of poetic and meaningful lyrical phrases such as “dead end smiles.” It’s a very passionate song that is delivered in a way in which you feel for everything the lead singer is telling his listeners. The downside to this particular track is that sometimes the lyrics are a bit muddled and hard to make out. It’s quite a shame because what one can hear is superb and it makes one wonder what other written treasures they are missing out on. Still the vocal performance alone carries the song and it makes it a highlight on the LP. So even though one might not always be able to understand what is being said, it’s the type of tune where the band is so invested in the track that it translates over to those hearing the song and it almost doesn’t matter that the lyrics are buried. One not only just rolls with it, but the whole song becomes like a treasure hunt, trying to listen hard to find the buried gold.

The best track on the album is “Answers.” It has a slightly The Police/Sting vibe to it which is unlike anything else on the record. “I believe in the light/I trust in loneliness as I lay in my cave/I question darkness,” the lead singer admits and this imagery that is repeated throughout the tune and becomes the song’s signature movie. The instrumentation is grand and full and rounds out the song and the chorus in all its 80s throwback glory is a pleasure to hear. A bit atypical in its structure it only makes the track standout even more in the best way possible. The outro brings the tune down just a slight notch but overall it is a stellar piece of music.

Some of the lesser moments on the album include “Twin Flame” which stays a bit too long on the intro before diving into the vocals, “Switchblade,” which doesn’t have much of a melody, and “Goddess,” which doesn’t connect. Still this reviewer is impressed with the album and encourages everyone to listen and give it a try. It may surprise you.