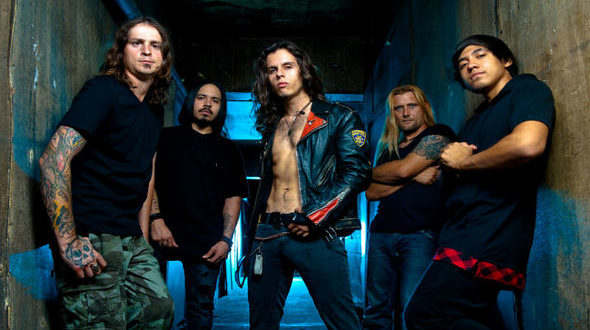 The story of The Mendenhall Experiment doesn’t start in 2008 when the band was formed in Southern California. It starts with the birth of founder and guitarist Brandon Mendenhall who was born with cerebral palsy, a neurological condition that affects movement, coordination and balance. It’s an incurable disorder, and one that Brandon has conquered many times in his life, perhaps no more so than living out his lifelong dream of forming a band and getting to tour with the likes of Suicide Silence, John 5, POD, Prong, Smile Empty Soul and Fear Factory. Brandon’s left hand was completely paralyzed but through rehabilitation, he managed to teach himself to play guitar and has been on a mission ever since to bring together a band of quality musicians that are primed for national attention. Like Brandon, bassist Nathan Stockton also overcame his own battle with childhood deafness and vision impairment through music.

May 19 marks another incredible step in the journey with the release of the band’s self-titled debut EP on Lucent/Universal, which is available for purchase and streaming on Apple Music, Google Play, Spotify, Pandora and Amazon.com. The EP is kicked off by lead single “Seize the Day,” which was previously named Top Featured New Metal Artist on iTunes/Apple Music.

Korn’s James “Munky” Shaffer lays siege with assaulting guitar work on track “Prosthetic” and Nine Inch Nails/A Perfect Circle alum Danny Lohner contributes dark atmospheric instrumentals on the intro to the album as well as the outro to ending track, “Find A Way Out,” making this EP just the first taste of a band with a promising future and inspiring message about disability awareness and pursuing dreams in the face of obstacles.

In 2015, Brandon was deemed Trailblazer of the Year at the United Cerebral Palsy Los Angeles Art of Care annual event. In addition, he has also been named celebrity ambassador for DayTrippers, a UK-based charity assisting disabled people in Great Britain.

“If you asked me why I want to be a rock star…it’s not about the fame or money,” guitarist/songwriter Brandon Mendenhall states. “I have a unique opportunity to inspire people and kids with disabilities with my playing, my music and my story. I truly believe that’s what I was put on this earth to do.”

Danny Lohner adds, “Brandon and I had been friends for quite a while before I knew he was in a band. When he finally shared his music with me, I was blown away and honored to do the intro/outro to the album.”

And James “Munky” Shaffer says, “This is a big inspiration, not only for myself but it should be for lots of people that not only want to get into music but that want to follow their dreams in anything.”

Shaffer (and Rob Zombie guitarist John 5) also appear in an upcoming documentary about The Mendenhall Experiment and Brandon’s journey, called “Mind Over Matter.”

The week after the EP release, The Mendenhall Experiment (sponsored by Monster Energy) will head out on a string of tour dates including an annual “homecoming” show in Brandon’s hometown of Kankakee, Illinois and culminating with an appearance May 27 at Rocklahoma in Pryor, Oklahoma, taking the AXS Stage shortly after rock band Soundgarden. The appearance follows a well-received set at the 2016 Aftershock Festival in Sacramento, California sharing the same stage as Korn, Disturbed and Avenged Sevenfold.

And more to be announced soon!

Previous Gallery: Life of Agony at Irving Plaza in New York City 4.28.17
Next PVRIS Announce Upcoming Album “All We Know of Heaven, All We Need of Hell”