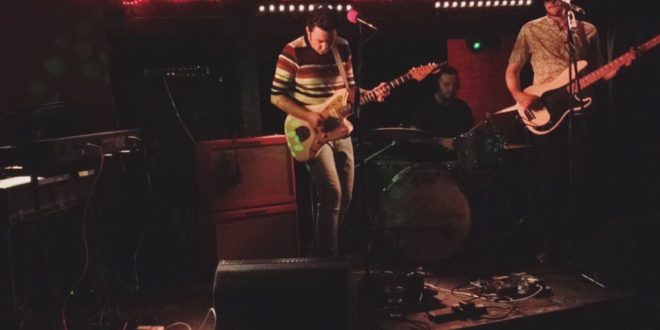 Not only was Broadcast the perfect place to highlight their clearly well-developed sound and unique, groovy melodies, the band also teased of an up and coming music video for their pre-released single, “T.R.O.U.B.L.E”, which they described as a “sexy cartoon accompaniment” animated by Scott Morriss of The Bluetones.

Before the show, Music Existence had the chance to sit down with William Douglas (bass/vocals of MGC) to discuss their one-off sound and new music yet to come.

ME: For a little background, how did Miracle Glass Company come to be?
We had all been in different bands in Edinburgh, then me and Austen George had the idea to do a 3-piece rock n’ roll thing. I thought it would be cool if we could all sing harmonies and write songs too, so we asked Andy Duncan to get involved and we took it from there.

ME: How would you describe your sound for someone that has never heard it before?
Catchy rockin’ tunes performed on Electric guitar, bass, drums and 3 part vocal harmonies, with the odd psychedelic freak out.

ME: How do you guys feel that your music has been perceived on this tour?
People who are into it really love it. We find some folk seem to be conditioned against rock’n’roll, for whatever reason, and are into something else, but we’ve been managing to turn them on to what we’re doing. You can’t beat the energy of good rock’n’roll played loud and sweaty, and we’re also pretty keen on a good melody hook so everyone can get in to it.

ME: You said you will be pulling out some new material that people have never heard before?
Yeah, 2 or 3 new numbers which are sounding cracking.

ME: What are you most excited for fans to hear?
Everything. The old stuff is still new to most people too, although there are more and more people showing up to gigs and singing along with our songs. But we are getting tighter and the sound is constantly evolving and improving all the time. So, yeah, everything.

ME: 2017 is off to a great start for you guys, having been announced for Carnival Fifty Six alongside The Van T’s, Indigo Velvet and WHITE – Is there anything specific that you’re most excited about so far?
That looks like a really good one, I quite fancy that. Otherwise, just looking forward to getting around the UK in a van and spreading the music far and wide. Also, recording MGC2…

ME: What bands/artists have you been listening to lately?
We all like different stuff. As I write this I’m listening to Kashmir by Led Zeppelin. I think we’re going to start putting Miracle Glass Company playlists up on Spotify to let people get an idea of what we’re into. We listen to a lot of good old stuff in the van – The Band, Toots, Little Feat, Chuck Berry, Blind Faith, Manassass, James Brown. Are far as modern acts go, Father John Misty, Lana Del Rey, Tame Impala.

ME: And finally, what is to come for Miracle Glass Company in the next 6 months?
We have a pretty cool music video for our song TROUBLE. It was animated by Scott Morriss from The Bluetones (we toured with them last year) and he’s done a brilliant job. We also have our bi-monthly gig in Edinburgh, it’s called Late Night In The Big City and we invite other acts and DJs to come and put on a show with us. The first one was awesome and I’m really looking forward to the 28th of April when we’ll be playing with Glasgow’s Medicine Men and we’ll have 2 guest DJs spinning the very best rock’n’soul tunes of all time. It’ll be brilliant.