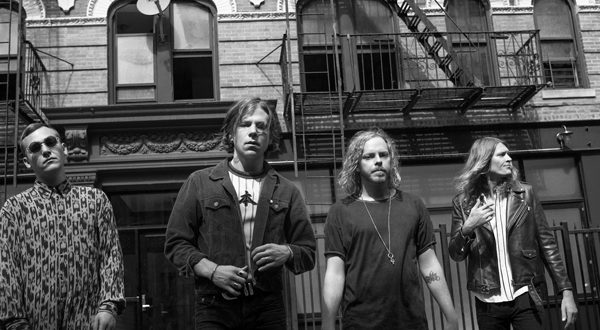 Cage The Elephant’s UK tour this month, which includes their biggest London show to date at Brixton Academy, has now completely sold out. Long celebrated as one of the most explosive live bands in the world, Cage The Elephant truly lived up to that billing at Reading and Leeds Festivals last year, completely packing out the Radio 1 / NME stage at both events and for many providing one of the most ‘’talked about’’ sets of the weekend. The band will live stream their sold out Brixton Academy show on 20th January. Cage The Elephant’s current album Tell Me I’m Pretty has been nominated for a Grammy Award in the ‘Best Rock Album’ category. The album, their second to be nominated for a Grammy, was recently certified Platinum in the US.

Cage The Elephant have unveiled the video to their new single ‘Cold Cold Cold’. Written and directed by singer Matt Shultz, the video premiered on Rolling Stone.

On the inspiration for the video, Matt said, “I think we’re all very prone to subscribe to a safe, surface level pursuit of happiness, keeping our adversities out of sight out of mind, in a way. We try to fix ourselves to fit into the social norm, and it is so easy to forget that in one way or another, the broken hearted are the beautiful ones.”

Cage The Elephant performed ‘Cold Cold Cold’ on The Late Show with Stephen Colbert earlier this week.PRESS HERE to watch the band’s dynamic performance, with Matt Shultz leaping from Stephen Colbert’s desk mid-song while guitarist Brad Shultz ended the performance by kissing Colbert on the lips.

Cage The Elephant’s fourth studio album ‘Tell Me I’m Pretty’, released through Columbia Records, was produced by Dan Auerbach of The Black Keys (Lana Del Rey, Ray LaMontagne, Dr. John, The Pretenders). The albums two singles, ‘Mess Around’ and ‘Trouble,’ both topped the Alternative charts for a total of seven #1 Alternative songs. Cage The Elephant sit with the most elite artists in radio format history – Red Hot Chili Peppers, Foo Fighters, Green Day and U2 – as the biggest airplay bands since the 1988 chart origin, with more #1 Alternative songs than any other artist this decade.