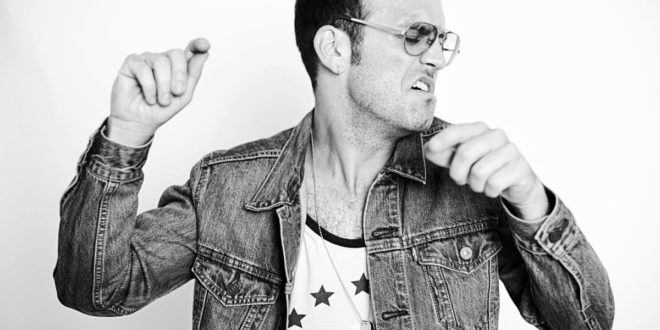 I have been patiently waiting for Theo Katzman’s new album to come out for about 3 ½ years now. Ever since I saw the Long Island, New York-born, pop-indie rock singer/songwriter perform in the summer of 2013, I was hooked on his music. 1 minute and 30 seconds into his first song I texted my friend and said, “This guy is amazing!” At the time, he had an album out called, Romance Without Finance, which I promptly bought at the merch stand after the show and haven’t stopped listening to since. That’s not an exaggeration. Ask my family.

Last Friday, January, 6, he finally released his second album, Heartbreak Hits, and as you can imagine, I’ve yet to stop listening to it.

Theo is a multi-instrumentalist that plays the guitar, drums and bass in addition to writing and singing his own music. He is also part of the funk band, Vulfpeck, which regularly sells out shows all over the country. His new solo album is different from what he does with Vulfpeck, as it’s more pop/rock/soulful. I think fans of Vulfpeck will enjoy it though, as Theo’s sweet tenor vocal stylings are similar to those of Vulf’s “Back Pocket” and “Christmas in L.A.”

The album as a whole plays like the stages of any breakup; from sad, soulful songs like “Plain Jane Heroin” and “Love is a Beautiful Thing” to more upbeat songs like “Hard Work” and “As the Romans Do.” It starts off with the lively, “Hard Work,” which talks about putting the hard work into a relationship, even doing the laundry and “folding it real nice.”  Since it’s been released, I’ve seen a lot of tweets from people asking if Theo will do their laundry.

I relate to this song, not because of some romance but because it’s true for friendships too. I’ve had friends where I’ve put a lot of work into the relationship and the other person just doesn’t reciprocate. So even though I’m happily married, this song was still really relevant and relatable to me. The song has a pop-rock feel to it and I think it’s good to listen to in the car or, you know, while doing your laundry.

Moving from the fast paced feel of “Hard Work,” the next song, “Break up Together,” is a slower, melodic tune about sharing the responsibility and guilt of breaking up. Theo’s voice is buttery smooth during the verses, contrasted by higher falsetto notes during the chorus. The whole song comes together in a way that I think could wrap your broken heart in a warm hug.

“Crappy Love Song” is next and just the title makes me laugh. Talk about a song trying to be self-aware. Although, I beg to differ with Theo on this, as I don’t think the song is crappy at all. It talks about not wanting any more “sad, sappy love songs” and wanting a “glad, glad, happy love song” and how he’ll even take a “crappy love song like this one.” When I listen to it, I just want to shut my eyes and sway back and forth. The chorus features gospel-style singers in the background, which only adds to its awesomeness.

Another track that grabbed me right away is “My Heart is Dead.” This song is about as hard rock as the album gets. As you can guess, it’s another breakup song. The lyrics paint a very vivid description of him lying on his bed with the blood pooling on the sheets, a hole in his chest, and the fact that no one even bothered to call the cops. One of my favorite lines is, “I’m a zombie in disguise.” I’ve felt that way before, walking around, going through the motions and no one else notices how dead you feel inside. The whole song is a great metaphor for how it feels to break up, especially if it’s out of nowhere. I love the screaming in the chorus, it just completes the whole feel of the song.

Worry not, as the next song seems en route toward the acceptance part of a breakup. “It’s Good to Be Alone” is a nice slow tune that has a little bit of a country feel to it. The lyrics, however, contradict the title. I love songs like this that sound happy but then when you listen to what he’s singing, you realize it’s not actually a happy song.

“Lost and Found” is another one that had me dancing around from the first verse. It has some really clever lyrics and a great beat. The metaphor of needing to be taken to the lost and found because you have been lost by accident is amazing. The chorus is easy to sing and after the first time I heard it, I was still singing it later that day. To me, the song sounds like a journey from wanting to be someone, to finally making it, to being jaded by what actually making it means. It strikes a chord with me personally, as my youngest is an aspiring actor, and even at age 13, he knows that he’ll have to navigate some difficult waters to “make it.”

Reminiscent of his previous album, “1-Bedroom” reminds me of “Country Back Roads,” which I love. It’s a sweet song that conjures up my days in college when I met my husband and we lived in a tiny beach apartment. We didn’t have a lot but we were so happy. “We can get down to the Steely Dan” makes me laugh because I’m fairly certain that’s what we listened to in college.

One of the tracks that made me fall in love with Theo’s music was the song he played when he opened for Darren Criss on 2013’s “Listen Up” tour. “As the Romans Do,” though my friends and I just called it “Romans”. It’s a high energy song about picking up and moving across the country to follow your dreams. He starts the song by listing a bunch of items he’s packing, some of which I had to consult Google to figure out what the heck they were. (Tascam Reel?) It also seems that you should never volunteer to help Theo move because it sounds like he owns some really heavy objects. The song goes on to describe his journey, all using Roman mythology metaphors including togas, aqueducts, statues, and even siren songs. It’s so much fun! After listening to crappy You Tube video versions of this song since 2013, the recorded version blew me away! It was everything I had hoped for and more.

Another song that makes me feel like I’ve been wrapped in a warm hug is “Love is a Beautiful Thing.” The lyrics are actually quite sad but Theo’s voice is so lilting and wonderful, I forgot that he’s singing about a terrible heartbreak. I wish there were better words to describe how much I love his voice in this song. It makes me want to create a new adjective. The end just breaks my heart into a million pieces with its final verse. “And on your hand, I see that there’s a ring. And I would understand if I had put that ring upon your hand. But it was not me, you see, so how could that be a thing of beauty?” Thanks, Theo. Now my heart is dead.

The last song is “Plain Jane Heroin.” Again, a beautiful song about such a sad subject. The lyrics liken the unhealthy sentiments of a breakup to a relationship with heroin. It’s a great metaphor, and even though I’m unfamiliar with heroin, I got the point. The guitar in the song seems to sing, as well. It’s a great sound.

Overall, the album was well worth the long wait. I want to say “As the Romans Do” is my favorite song only because I’ve been waiting for a recorded version of it for so long. With so many amazing tracks however, it’s really hard to choose. Every day I have a different one that I think might be my favorite. I’m sure that’s the sign of a good album. I hope my family likes it too, as they are going to be hearing it on repeat for a while.

Fun Loving Music Photographer and lover of live music in general. I am most likely to be spotted with a coffee in one hand and a camera in the other, somewhere in Philadelphia, New York City and everywhere in between. For more of my music photos: http://myphotos.bellemorephotography.com/
@bellemorephoto
Previous Stream Pacific Radio’s ‘Kitchen Table’ EP Now!
Next CAGE THE ELEPHANT Share New Video Ahead of SOLD OUT UK Tour