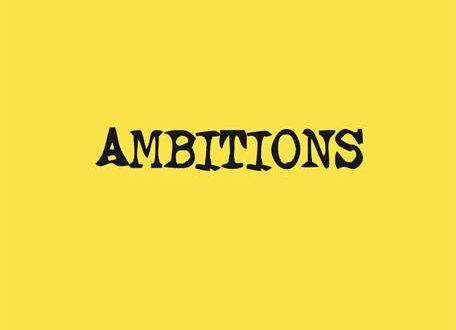 Fueled By Ramen recording group ONE OK ROCK has announced the release of their eagerly awaited Fueled By Ramen debut. AMBITIONS arrives everywhere on January 13th, 2017.

ONE OK ROCK frontman Taka commented on the album’s artwork and significance stating, “Yellow is the color of hope, and in making this album, I incorporated the themes of hope, inspiration, and elevation. From those themes arose the album’s title “Ambitions.” He added, “We wanted to make an album where we can all sing along together. By singing strongly in unison about hope, we wish to reinforce the importance of not giving up.”

Furthermore, ONE OK ROCK has announced that they will hit the U.S. for a special series of headline dates to celebrate AMBITIONS.  The U.S. dates get underway January 15th 2017 at Terminal 5 in New York.  Tickets for the Chicago, Toronto, Los Angeles, San Francisco and Seattle dates of the tour will go on sale November 22nd at 1pm (EST) with tickets for the New York date going on sale December 2nd at 12pm (EST).  All tickets will be available for purchase at oneokrock.com.

Recently named “Best Japanese Act” at the 2016 MTV Europe Music Awards, ONE OK ROCK heralded AMBITIONS earlier this fall with the new single, “Taking Off,” available now at all DSPs and streaming services. Produced and directed by Sitcom Soldiers (Sleeping With Sirens, All Time Low), the track’s stunning companion video is streaming now at the official Fueled By Ramen YouTube channel.

Comprised of vocalist Taka, guitarist Toru, drummer Tomoya, and bassist Ryota, ONE OK ROCK is among Japan’s most popular and beloved rock outfits, with each of their last four releases debuting in the nation’s Top 5, including the #1 blockbuster, “35xxxv.” The band’s official U.S. debut and first all English language release, “35xxxv (Deluxe Edition)” includes the worldwide hit single/video “Mighty Long Fall,” now boasting over 33 million views at YouTube alone.

Known for their thrilling live shows, the band recently performed two massive concerts at Shizuoka, Japan’s Nagisaen before a cumulative audience of more than 110,000 which was captured in the official live video for their single “Taking Off.” No strangers to the road, ONE OK ROCK have also toured extensively in the U.S., teaming with such like-minded acts as All Time Low, Sleeping With Sirens, Issues, and 5 Seconds of Summer. As if that weren’t enough, ONE OK ROCK has made explosive main stage appearances at rock festivals in Europe, South America, Australia, and the U.S., including a well-received run on the 2014 Vans Warped Tour.