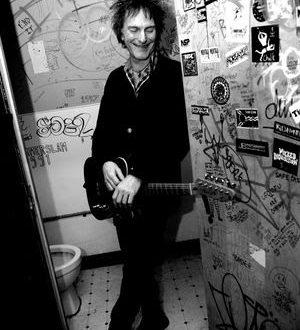 Tommy Stinson, his Bash & Pop mates and Fat Possum Records are proud to present to you “On The Rocks,” the first new track from Anything Could Happen, the long-awaited follow-up to the band’s 1992 debut, Friday Night Is Killing Me, in stores January 20th.

The video can be seen here and features video clips from the band’s last couple years, starting on January 23, 2015 when Tommy first brought Luther Dickinson, Cat Popper and Frank Ferrer into the studio to begin what would become Anything Could Happen, and culminating in their boisterous live experiences that the fans can expect to see in 2017 and beyond.

“‘On The Rocks’ is one of the first songs that I penned for this record in the rock department. I’ve been writing a whole bunch of stuff over the last few years, and this is the one that I decided was going to be sort of the lead-in kind of song as far as how the record is going to sound.” – Tommy Stinson

Fat Possum has also revealed the new album’s cover and track listing (below).

In other news, Sire/Reprise has announced a release date of January 24, 2017 for the first ever vinyl pressing of Friday Night Is Killing Me.

Both albums are available for pre-order via Bash & Pop’s exciting Pledge Music campaign, which can be visited here. In addition to ordering the new music, fans can Pledge towards unforgettable experiences with Tommy and the band (Tommy officiates your wedding, “Billiards w/ Bash & Pop”, Full Band Kegger in Your Basement) as well as unique memorabilia such as Tommy’s old bass guitars, both smashed AND fully intact.

All pre-orders of Anything Could Happen come with an instantly gratifying download of “On The Rocks.”

Bash & Pop will tour the U.S. and beyond in 2017, tour dates to be announced soon, including the band’s first show since the late-1990’s (at Minneapolis’s legendary 7th Street Entry) and a swing through the SXSW Music Festival & Conference in Austin in March.

ANYTHING COULD HAPPEN TRACKLISTING:

Anything Could Happen is the 2nd album by Bash & Pop, a very welcome and loooong-awaited follow-up to 1992’s Friday Night Is Killing Me. The helmsman of the group is one Thomas Eugene Stinson, better known as Tommy of The Replacements – the seminal band of which he was co-founder, bassist and sparkplug. Now, coming off a fruitful 18-year stretch playing bass with stadium rockers Guns N’ Roses (“It was good for me on so many levels”) and a hugely successful 33-show Replacements reunion romp, Tommy is clearly jazzed to be doing his own thing again.

You may ask, why resurrect the name Bash & Pop now? Tommy explains, “The first B&P album was rootsy, very rock n’ roll and as the new stuff started to come together, it felt like that. Also, as I was playing rough mixes of some of these new recordings for friends, many said it reminded them of the B&P record … so it just seemed to make sense.” There’s a distinct camaraderie at work in these performances, a real band feel that harkens back to Tommy’s formative years.

Tommy’s history has been well-documented, but here’s a quick primer: He first picked up a bass in 1978 at the age of twelve, urged by his guitar-playing big brother Bob. Together they formed a band called Dogbreath, which featured, among others, Chris Mars on drums. In 1979, when fledgling musician Paul Westerberg heard the racket they made blaring out of the basement of a house he passed on his way home from work, The Replacements were effectively born. Over the course of eight albums and extensive touring, the band made an indelible impression. The Replacements broke up in 1991 but their influence can still be felt to this day. Since then, Tommy has made lots of music; the aforementioned Bash & Pop debut; his more democratic and pop-ish band Perfect made an EP (When Squirrels Play Chicken – 1996) and an album (Once, Twice, Three Times A Maybe – recorded in 1997 but delayed by record company shenanigans until 2004); plus two solo albums – Village Gorilla Head (2004) and One Man Mutiny (2011). In addition, he was an integral part of GnR’s Chinese Democracy(2006) and two albums with his longtime mates, Soul Asylum – The Silver Lining (2006) and Delayed Reaction (2011). The Replacements also reared their heads again with cathartic and unanimously well-received reunion shows in 2013, ‘14 and ‘15. New recordings were made but ultimately scuttled.

Arguably the best thing Tommy has done post-Replacements, Anything Could Happen sports nine rockers and three ballads. Recorded in Hudson, NY and London, the album roars outta the gate with “Not This Time,” a song Tommy says was specifically written to be Track One. “I wanted this thing to come out with, ya know, just – BAM! – rock n’ roll!” The album is full of spontaneity, belying how clearly focused and well-constructed it is. The care taken in the singing is especially impressive. The choruses are hookier than ever. The lyrics strike a balance between true and imagined, wisdom and hilarious wordplay; and some are autobiographical – the album partly chronicles the drawn-out demise of a relationship. Loaded with Tommy’s tried and true Faces-Stones-Mats swagger, “Anything Could Happen” and “Bad News” are about adaptability and optimistically facing the curve balls life can throw. “Breathing Room” couples a catchy tune with a heartbreaking lyric: “You’re the dream I thought that I had / I’m the wish that won’t come true … We’re running out of breathing room / Ain’t that a bitch, being stuck this way.” One striking line in the ballad, “Anytime Soon,” may sum up the shattered yet resilient dichotomy of the record best: “You won’t see me dangling from these rafters anytime soon.”

When asked what makes this project such a leap from his previous efforts Tommy replies, “On the one hand, I might’ve just gotten lucky! (laughs) But on the other hand, I totally approached it in a different way than I have in the past. The last two solo albums were done rather piecemeal. On this one I had all the songs written in advance and, with the band there throughout the sessions to help make the tracks really ‘sing,’ it improved the whole process.”

Speaking of the band, here’s the lowdown: Tommy sings and plays rhythm guitar throughout and handles the bass on eight of the twelve tracks; lead guitar duties are split between Steve Selvidge (The Hold Steady) and Luther Dickinson (North Mississippi Allstars); the drum stool is shared by Frank Ferrer (Guns N’ Roses, The Psychedelic Furs) and Joe Sirois (The Mighty Mighty Bosstones, Roll The Tanks); Cat Popper (Ryan Adams, Grace Potter & The Nocturnals, Jack White) – plays bass when Tommy doesn’t; Tony Kieraldo takes care of all keys; Justin Perkins (Screeching Weasel) laid down some acoustic guitar, percussion and backing vocals in addition to mixing and mastering the record. Chip Roberts (The Drinkers, one-400’s) and Davey Lane (You Am I) guest on guitar. Moving forward, Steve, Joe and Justin will fill out the touring band.

When you listen to a Tommy Stinson record, under any moniker, you’re hearing rock n’ roll done by a lifer, someone who has literally spent three-fourths of his time on this earth touring and making music. If you subscribe to the theory that it takes 10,000 hours to achieve mastery in any field, Tommy Stinson has done that, many times over. And with Anything Could Happen, He doesn’t want to waste your time … no, not this time. – Peter Jesperson

Previous JOHNNYSWIM to perform on Macy’s Thanksgiving Day Parade
Next Gallery: Shinedown at T-Mobile Arena in Las Vegas, NV on 10.28.16 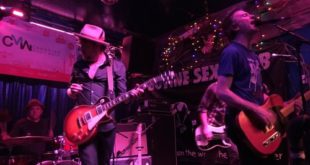 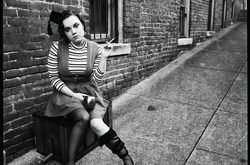