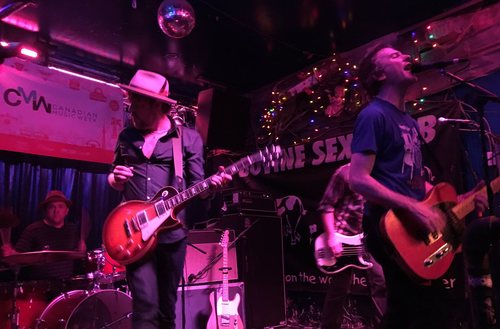 Tommy Stinson’s BASH & POP are happy to announce West Coast dates for 2017, kicking off in Seattle, heading down the coast via LA’s legendary Troubadour, and then over to Austin for SXSW.  Anything Could Happen, the long-awaited follow-up to the band’s 1993 debut, Friday Night Is Killing Me, will be in stores January 20th via Fat Possum Records. Additionally, Sire/Reprise will release the first ever vinyl pressing of Friday Night Is Killing Me on January 24th.

Tommy has roped in a few of his friends who helped make much of the new BASH & POP to hit the road with him – lead guitarist Steve “The Sleeve” Selvidge (The Hold Steady), Joe “The Kid” Sirois (Mighty Mighty BossTones) on drums and Justin “Carl” Perkins (Screeching Weasel) on bass guitar.

The tour starts out next week where the band began – at the legendary 7th St. Entry in Tommy’s hometown of Minneapolis –  and makes its way east for a sold-out show at NYC’s Mercury Lounge.

Fat Possum has just revealed “Never Wanted To Know,” a tight, riff-heavy romp from the new album that Tommy recorded with Steve and Joe the day that Prince passed away. The song seems to have been inspired by watching too much CNN in 2016 with such lines as “Shot down, bleeding from his back in the rain / Some kid, they didn’t even know he was eight.”

The first video from the album, “On The Rocks“, was revealed at the beginning of November and features clips from the band’s last couple of years, starting on January 23, 2015 when Tommy first brought Luther Dickinson, Cat Popper and Frank Ferrer into the studio to begin what would become Anything Could Happen, and culminating in their boisterous live experiences showcased in the “On The Rocks” video and in a pizza pajamas-filled encore from St. Paul, MN last year that was just uploaded to the band’s socials.

Both albums are available for pre-order via BASH & POP’s exciting Pledge Music campaign, which can be visited here. In addition to ordering tickets for the band’s first show in Minneapolis and picking up the new music, fans can Pledge towards unforgettable experiences with Tommy and the band (Tommy officiates your wedding, “Billiards w/ BASH & POP”, Full Band Kegger in Your Basement) as well as unique memorabilia such as Tommy’s old bass guitars, both smashed AND fully intact.

All pre-orders of Anything Could Happen come with an instantly gratifying download of “On The Rocks”.